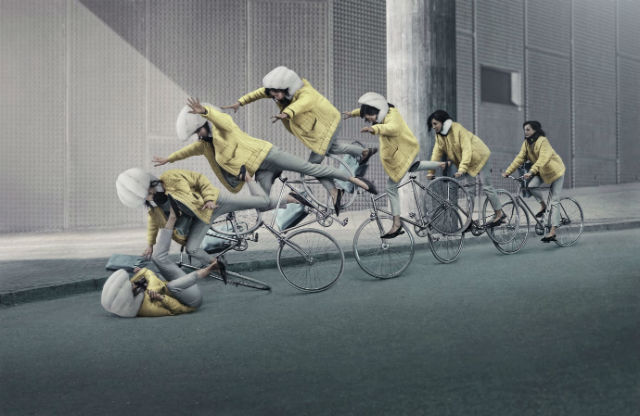 Founded in 2006, Malmö-based company Hövding tackles the issue of road safety for cyclists by replacing the traditional bicycle helmet with an airbag collar.

Besides looking considerably more fashionable than a helmet (and protecting your hairstyle), the airbag helmet was found to be ‘near perfect’ in terms of protecting cyclists’ head and neck in the event of an accident and eight times better protection compared to traditional bicycle helmets, according to a Stanford University study.

“Worn like a collar, Hövding uses multiple sensors that enable it to read and identify when an urban cycling accident is imminent,” explains Anna Katarina referring to the algorithm behind Hövding’s technology.

“As it records a cyclist’s body movements at 200 times per second, it can activate before an accident. Once triggered, the in-built airbag is fully deployed in 0.1 seconds, providing full protection for both head and neck before impact,” she adds.

The idea for Hövding was developed in 2005 by Industrial Design students Anna Haupt and Terese Alstin. The Swedish government had just passed a new law making the use of bicycle helmets mandatory for children up to the age of 15 years old.

Both students wanted to find out if it was possible to develop a bicycle helmet that people would happily wear, whether they had to by law or not.

It might have taken seven years for Hövding to become an approved and certified product, but the airbag collar caught attention for its innovative design right from the start by winning the Venture Cup competition, where young entrepreneurs get to develop their idea into a sustainable business plan.

Innovation has always been at the centre of Hövding’s mission: “We are constantly working with innovation and development of our product. We maximise safety and customer need, that is the essence of Hövding,” says Anna Katarina Skogh.

Hövding makes cycling safer; however, it also promotes a more sustainable lifestyle in a similar vein to many Swedish companies.

“We believe the world will become a better place if more people choose the bicycle – for inner city environment, health and climate reasons”, said Fredrik Carling, CEO of Hövding

What better place for Hövding to be based then, than inMalmö, the sixth greatest cycling city in the world. There might be a lot of talk about Stockholm and its innovative atmosphere, but Malmö, Sweden’s third largest city, is not to be disregarded in the field.

Drawing inspiration from Stockholm and Copenhagen, several initiatives have begin to pop up in Malmö over the past few years such as Malmö Startups, which aims to to create a community for future star businesses.

“We have been able to create an internal innovative atmosphere and been able to recruit people with the right mindset,” she says.