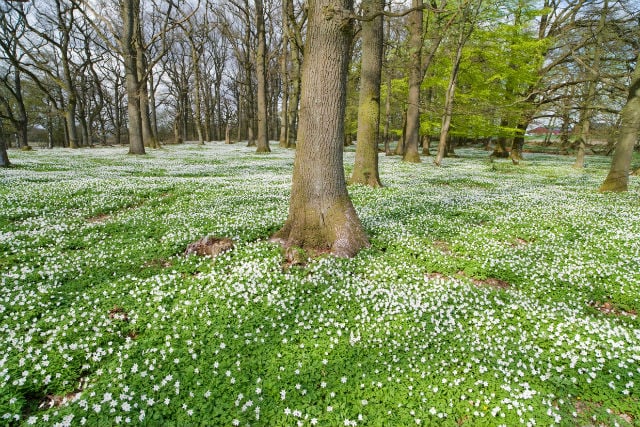 The Danish island of Zealand lacks beech woods like this one in Söderåsen. Photo: Anders Ekholm/imagebank.sweden.se
According to Tourism in Skåne, the number of Danes taking holidays or weekend breaks in the southern Swedish county jumped by nearly 30 percent last year, with Danes spending a total of 282,280 hotel nights in the area.
Anette Schiemann, park ranger at the Söderåsen nature reserve, told The Local that Danes outnumbered all other nationalities who visited the reserve's Naturum nature centre.
“At least half of our visitors come from Denmark,” she said. “It's the closest place they can go to find real, wild nature. They don't have beech forests of this sort of scale in Zealand.”
READ ALSO: That time Sweden and Denmark got into a Twitter war
Schiemann said that Danes also enjoyed taking advantage of Sweden's “freedom to roam” law, Allemansrätten, which allows anyone to camp out for a few days anywhere in nature without asking the landowner for permission.
Pia Jönsson-Rajgård, chief executive of Tourism in Skåne, said the weak Swedish krona was probably the main reason for last year's growth.
“We have a very favourable situation with the currency,” she said. “At the moment the Danish krone is very strong against the Swedish krona.
READ ALSO: Nine times Sweden and Denmark proved they are worlds apart
The Swedish krona has lost a fifth of its value compared to the Danish krone since the summer of 2012, with half of that drop happening in the last two years.
Jönsson-Rajgård said that the number of Danes coming to Sweden had increased every year since 2014, following a dip in the aftermath of the financial crisis.
READ ALSO: Öresund crossing sets new traffic record
As well as nature, Danes are drawn to high-end restaurants, and also spa hotels such as Ystad Saltsjöbad, which are both cheaper and better than what's available on Zealand, and also to shopping malls in Malmö, Helsingborg and in between.
“We have a good spread of very good spas, much better than they have on the Danish side,” she said. “It's shopping, spas and nature.”
For Danes, Skåne is somewhere you visit for a day trip, weekend or short break, rather than a proper holiday, she added.
“The Danish visitor is very spontaneous. They don't plan in advance, they take a decision on Thursday afternoon and on Friday they are on their way.”