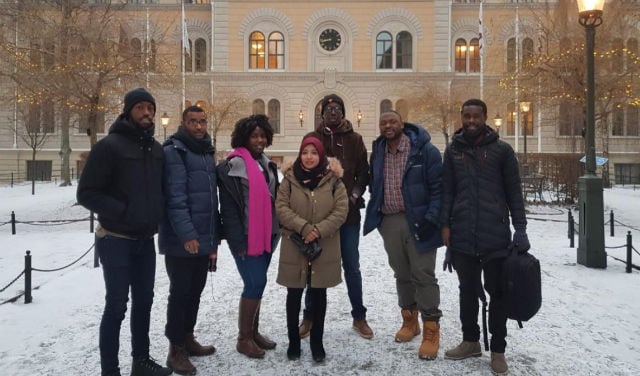 The link between migration, agriculture, and rural development remains one of the most debated topics in the academic and policy worlds, especially because of its impact on food security and human development.

The history of humankind is a history of migration. But the conditions under which migration takes place have varied considerably across time and space. Some migrations are voluntary, while others under forced conditions. The SIANI Annual Meeting 2019, held on 23 January, focused on the contemporary dynamics of migration and the implications for food security and rural development. Photo: Jean Bosco Bihinda and Julius Kanubah report on the round table discussion of their group.

Participants at the SIANI annual meeting explored issues of migration mostly in the context of the dynamics of violent conflicts and the socio-economic factors of poverty, food insecurity, unemployment, and lack of social protection. Additionally, there was the issue of environmental problems such as climate change, natural resource depletion and degradation and deforestation as well as natural disasters.

Broadly, all of these constitute the “push” factors of migration. For instance, violent conflict leading to political instability in places like Libya, Syria, Sudan, and Afghanistan pushed nationals and other inhabitants of those countries into other comparatively stable neighbouring countries. Some take the route to Europe and other developed regions of the world. As put by Sigrun Rawet, Deputy Director of the Stockholm International Peace Research Institute (SIPRI), unless the increasing trend of conflict in the world is prevented, issues of migration and hunger will remain a global challenge.

Aside from the issue of conflict, in other places such as sub-Saharan Africa, people seeking better lives are attracted to migrating into more economically developed regions such as Europe, Australia, Canada and the United States. In this instance, when unskilled or skilled people in a specific country choose to leave their country of origin to seek greener pastures or better living conditions elsewhere, the triggering factor for migration might be related to the “pull” factors of the targeted country of destination.

These “pull” factors might relate to better economic and political conditions including employment opportunities and respect for human rights. These points were highlighted and discussed during the event. For example, in a presentation on “mobility, migration and rural development in West Africa” with specific reference to Senegal, Jesper Bjarnesen, Senior Research of the Nordic Africa Research Institute, noted that “migration is a means to an end.” This implies that “migration is not only voluntary”, but rather “it is a first choice” for some people in economically underdeveloped regions.

With the push and pull factors of migration triggering more movements of people in contemporary settings, especially in politically unstable and economically underdeveloped countries, the impacts on agricultural productivity and food security are inevitable. Hence, the need to mitigate such migration flows by addressing some of the proximate causes of migration is crucial. One possible measure is to focus on addressing development constraints in politically stable but underdeveloped and low-income countries in a bid to generate employment and reduce the issues causing people to migrate.

This perspective was advanced by Ingela Winter-Norberg, Senior Policy Specialist of Migration and Development at the Swedish International Development Agency (SIDA). She noted that with 250 million people considered to be migrants in the world by the United Nations, SIDA was now operationalising a new strategy that looks at how migration can contribute to global sustainable development. Questions were then raised about how to include migrants in development and how to view migrants as development entrepreneurs.

Beyond the focus on migration and migrants, two presentations centred on agribusiness and agroforestry in the context of advancing policy and practical solutions to economic growth and development in the developing world.

In a presentation, titled, “agripreneurship -making agribusiness appealing for youth”, Steven Carr, Chief Executive Officer and Co-founder of Agripreneurship Alliance, emphasised the need for training young people in agribusiness to enable them to work and utilise the benefits of agriculture, which is crucial for employment, economic growth and development.

For Ingrid Öborn, of the Department of Crop Production and Agriculture Cropping Systems at SLU, it was essential to focus on improving agroforestry, because it has the potential to contribute to increased crop production and economic gain.

During the meeting, roundtable discussions were also held where participants shared ideas and came up with recommendations the future direction of SIANI in the context of the topic of migration, agriculture and rural development. One recommendation was for SIANI to work on changing perceptions on farming by creating and increasing awareness of and engagement in youth agribusiness as a means to highlighting the benefits and significance of farming to food security, income generation, economic growth and development.