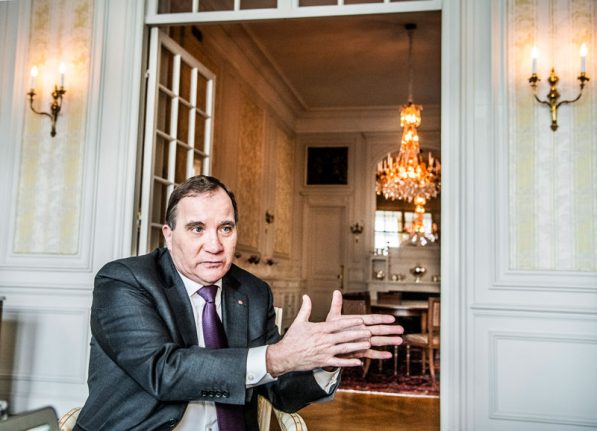 PM Stefan Löfven said the banking scandal could "undermine confidence in the whole system". Photo: Tomas Oneborg/SvD/TT
In an interview with news agency TT, Löfven said stricter legislation on Sweden’s banking sector may be necessary.
“If these latest developments are true and these failures can be attributed to Swedbank, then it is of course completely unacceptable,” Löfven said.
The PM was reacting to the fallout from an SVT documentary alleging that Swedbank may have been used for extensive money laundering over a 12-year period, including transactions linked to the scandal-hit Danske Bank.
Sweden's Financial Supervisory Authority (FI) has launched an investigation into what it called the “very serious” allegations against the lender.
Löfven said that if the money laundering allegations are proven true, it would “undermine confidence in the whole system”.
“In our society, trust is the alpha and the omega. If people find out that the banks are engaging in this type of business [money laundering, ed.], then trust is undermined,” he said.
When asked by TT if the Swedbank scandal is an indication that there needs to be more stringent governmental action to to combat money laundering the PM answered in the affirmative.
“Yes, we need this. The banking sector as a whole needs scrutiny because we cannot tolerate this as a society,” Löfven said. “More legislation can definitely be necessary.”
According to the SVT programme, 50 customers who exhibited “clear warning signals” that they may be involved in money laundering transferred around 40 billion kronor ($4.3 billion) between Swedbank and Danske Bank.
Preliminary charges were brought against the Danish lender last winter and it could face heavy fines over the suspected laundering, which is being investigated by authorities in France, Denmark and the US.
Some 200 billion euros, the bulk of which appears to have come from uncertain sources, was channelled through Danske's Estonian branch between 2007 and 2015.
Following that scandal, Swedish banks have claimed they were not open to the same type of laundering, due to a focus on domestic companies and individuals rather than international customers. Swedbank CEO Birgitte Bonnesen has said the bank has a “completely different approach”, but documents seen by SVT suggest this may not be the case.
These documents show significant transactions in the Baltic countries between Danske Bank and Swedbank, taking place between 2007 and 2015. These include companies without contact information or telephone numbers, many sharing the same UK address. A total of around 300 million kronor was sent by Swedbank customers to 40 companies at one address.
And there are thousands more customers of the bank who have accounts in Estonia, Latvia and Lithuania but are registered overseas, including in tax havens such as the British Virgin islands and Belize.