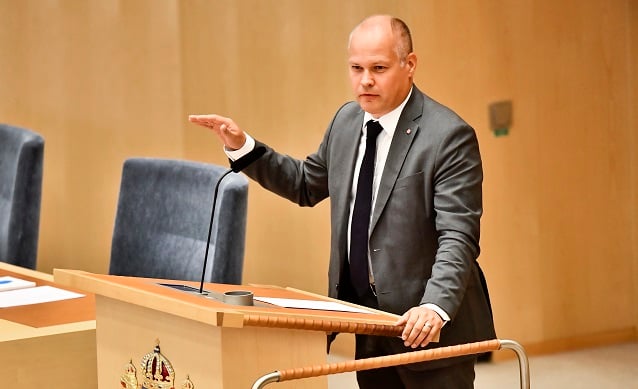 What is the proposed new law?

The laws would apply to people who recruit new members to the organization, something which is currently only punishable by law if these people were recruited specifically to carry out terrorist crimes. They would also make it a criminal offence to 'assist' terrorist organizations through giving them use of premises, arranging transport, providing them with equipment, or raising money for these groups, even if the person doing so is not a member.

“We will discover more cases of those who commit these crimes. It will be easier to map the networks themselves,” Justice Minister Morgan Johansson said on Thursday, after the law was referred to Sweden's legislative council for consideration.

The law would not however be applied retroactively, meaning that people who have previously joined terror groups would not be prosecuted.

FOR MEMBERS: Sweden's new laws to look out for in 2019

How does it compare with existing laws?

Several existing laws deal with terror-related crimes in Sweden; for example, it's illegal to openly call for terrorist crimes, to travel internationally for terrorist purposes and to train or recruit people to carry out such crimes. But the idea is that new law would make it possible to prosecute people even without evidence of this active involvement.

Following the deadly truck attack in central Stockholm in 2017, Sweden's government and opposition made an agreement on measures to tackle terrorism. This included tightening-up of laws, and a government-ordered inquiry suggested that it should be made illegal to be part of a terrorist organization.

What would the punishment be?

Under the proposal, the punishment would be up to six years' imprisonment for crimes classified as 'aggravated', and up to two years in other cases. Sweden's justice minister has said that involvement in Isis or al-Qaida, for example, would count as an aggravated crime.

These numbers are provisional, and may be changed before the law comes into force.

How do Sweden's laws compare to other countries?

Several EU countries have introduced laws similar to the Swedish proposal. In Belgium, more than 350 people have been sentenced for crimes linked to terrorism in recent years, and the most common crime is taking part in a terrorist group's business.

What are the next steps?

The proposal was officially presented on Thursday afternoon and submitted for review by the Council of Legislation. This is the body that checks draft bills before they can be submitted to parliament. Its decisions are advisory and non-binding, but the government often clarifies legislation based on the council's suggestions.

If the legislative council doesn't raise any issues with the bill's legal viability, Löfven has said the plan is to put the proposal to parliament relatively soon, with the aim of having the law come into force on August 1st. Floral tributes to the victims of the 2017 Stockholm terror attack. Photo: Fredrik Sandberg/TT