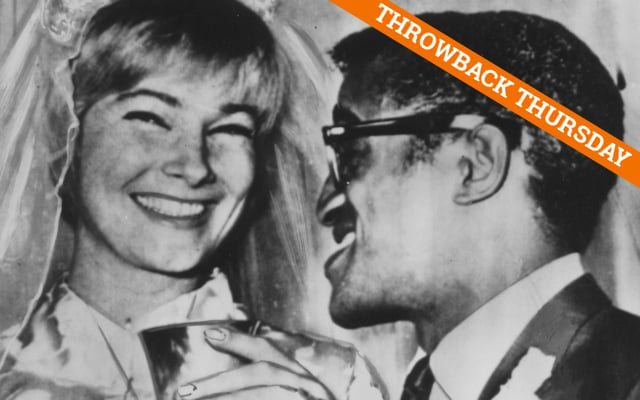 In mid-1960, 26-year-old Swedish actress May Britt Wilkens found herself at the centre of a race row garnering international media attention. Rumours of a relationship between her and 34-year-old African-American actor and performer Sammy Davis Jr, a member of the Hollywood “Rat Pack” that included singer Frank Sinatra and actor Humphrey Bogart, had been circulating for several months, but when the couple announced their plans to marry, all hell broke loose.

Newspapers around the world reported how, in London, where Davis was performing when the announcement was made, both he and Wilkens were verbally abused and threatened by followers of British fascist Sir Oswald Mosley. In the United States, where interracial marriage was illegal in 31 states, the couple faced not only the same treatment and worse, they were also targeted by newspaper predictions that the marriage would end Davis' career, and accusations that Wilkens was staging the relationship to further her own career. May Britt Wilkens and Sammy Davis Jr in 1958. Photo: TT

In Sweden, newspapers eagerly reported on the events as they unfolded. Though Wilkens was living in the US, where she was one of Hollywood's “rising stars”, she had been born and bred in Stockholm, and her parents still lived there. But if the media coverage of the engagement and ultimate marriage of Wilkens and Davis, which took place in Los Angeles on November 13th, 1960, was laying bare the institutional and overt racism of the US and Britain, Sweden seemed to be coming across rather well by comparison.

It was widely reported that Wilkens' parents liked Davis, openly supported the relationship, and flew to LA from Stockholm to attend the ceremony, with Wilkens' father giving her away. In Sweden, there appeared to be little public moral outrage over the interracial union, or any open hostility toward Wilkens or Davis personally. The couple's daughter, Tracey Davis, wrote in her 2014 book, Sammy Davis Jr: A Personal Journey with My Father, “Mom always said there was very little racism in Sweden, at least in the town where she grew up.” As for the fact that Davis was Jewish, and Wilkens converted to Judaism shortly before the marriage, Wilkens herself brushed off any concerns, at least from the Swedish side, when she reportedly said in an interview “that she and Sammy Davis Jr will have no trouble in Sweden, 'because we have very little anti-Semitism there'”.

Though there's no question that Sweden did not have the same racial baggage as the US or even Britain, it's a mistake to think the country was a paradise of racial and religious equality, devoid of prejudice or bias. Such a perception serves Sweden poorly, both in the representation of its history and in the present. As Paul Rapacioli, founder of The Local, wrote in his 2018 book, Good Sweden, Bad Sweden, such unconditionally positive narratives of the country's past have helped set the groundwork for equally distorted modern narratives of its supposed social and cultural collapse.

The reality is that marriage between individuals from different ethnic and religious groups was as uncommon in Sweden as it was in the US and Britain, and attitudes towards blacks and other ethnic and religious minority groups were only relatively less institutionally, culturally and socially biased.

FOR MEMBERS: How a revolutionary political idea changed Sweden for good In her 2011 doctoral dissertation, Love Ain't Got No Color?, for instance, Sayaka Osanami Törngren of Malmö University, wrote: “Sweden has never had any official anti-miscegenation law, although the fear of miscegenation has been articulated and manifested in politics and popular culture.” She cited examples of how during the first half of the 20th century, films, textbooks and other media positioned “racial mixing… as one of the biggest threats to the Swedish people”, including university course literature used in Sweden until the 1960s that specifically portrayed blacks as inferior.

Likewise, both historical events and modern scholarship inform us that Wilkens's view of Swedish anti-Semitism was also quite blinkered. According to Swedish historian Helene Lööw, “In the period after the Second World War, Sweden came to play a leading role in the dissemination of anti-Semitic literature.” In a 2000 article in the Journal of Scandinavian Studies in Criminology & Crime Prevention, Lööw documented how this was accomplished quite openly up to and beyond the 1960s by individuals like Einar Åberg, whose “activities in spreading anti-Semitic propaganda are unparalleled”.

Significantly, in late 1959 and early 1960 – just months before Wilkens and Davis became engaged – Sweden was affected by what became known as the Swastika Epidemic, when Jewish cemeteries throughout Europe and North America were vandalized and defaced with swastikas.

Today, we can look at the image of May Britt Wilkens and Sammy Davis Jr marrying in 1960 and reflect on how much has improved. Even better, we can also see the complex and insightful history behind it with new understanding, and recognize how much further we still have to go.