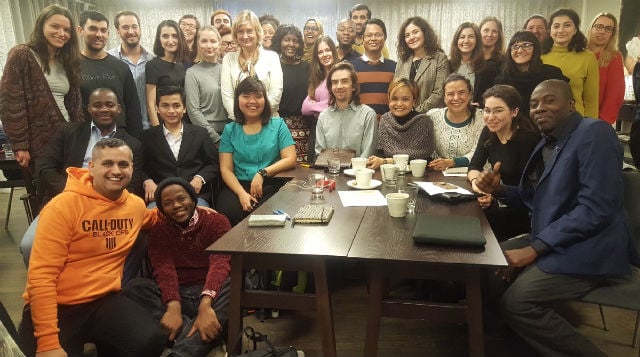 I was selected to attend an anti-corruption workshop along with 29 fellow SI scholarship holders about how we – as future global leaders – can make an impact on the topic.

Most SI scholarship holders, if not all, come from developing countries where corruption is high or difficult to control, so this workshop made us discuss how best to confront corruption and taught us relevant skills we can all apply.

Corruption is one of the significant challenges faced by developing countries as it slows down and prevents development. We have seen in some countries, government officials stealing vast amounts of money from their country which were initially intended for bringing change to the education, health, agriculture and infrastructure sectors. These developments are crucial in terms of helping citizens get out of poverty and starvation. Some countries are growing poorer by the year because of misused funds and a lack of accountability.

To some degree, corruption also plays a significant role in political instabilities in some countries as the resources are wrongly used, causing tensions and sometimes leading to political turmoil and civil wars. So, the question was then: what can we do as Future Global leaders? In one presentation Natali Phalen, the General Secretary of the Swedish Anti-corruption Institution, gave insights on the effect of corruption, emphasizing the issue of trust. Corruption destroys trust and subsequently affects the functionality of structures within organizations. She went on to give estimated financial figures from the World Bank, stating that every year, the cost of corruption is approximately $1.5 trillion. Furthermore, corruption has a disastrous impact on the world's progress in attaining the sustainable development goals 2030 brought forward by the UN. Indeed, it limits the beneficiation process of the less privileged and vulnerable societies, for instance by increasing costs and reducing access to services, amenities or the access to justice.

Further along the workshop, we went on to discuss areas posing high risks in terms of corruption prevalence including a culture of blindness, a culture of silence and informal rules, and a culture of efficiency

Corruption is enabled by certain conditions such as pressure, opportunity and rationalization. To fight corruption, one way is to eliminate the opportunity aspect. As future global leaders, we need to ensure that people are provided with equal opportunity regardless of their race, nationality, status and their association with us.

We then discussed the current status of corruption in Sweden and the available organizations in place to eliminate or minimize the occurrence of corruption. Natali gave us a review of enforcement and corruption cases in Sweden during the year 2018, where 25 cases were recorded, and 44 people were prosecuted. This is an indication that the structures and the people in the country are aware of and understand the issues of corruption. This has motivated me as an individual to look for ways to help my country, Botswana, fight corruption and ultimately foster change by teaching and influencing other active youth to be more engaged in community development projects.

The next presentation was delivered by Lotta Rydström and Ylva Skoogh who gave a brief introduction to Transparency International, an independent non-profit organization leading the fight against corruption, their mandate and countries that are affiliated to it.

We established that corruption has such a wide range of definitions because corruption varies from one place to the other. We ultimately settled on defining it as: “the abuse of entrusted power for private gain”.

This presentation brought a more statistical approach to analyzing and studying corruption data and the different barometric tools used on international platforms including Gapminder, Corruption Perceptions Index or the  Happy Planet Index, to name just a few with different purposes.

Finally for the world to prosper as a unit, we need to work together and eliminate threats that humans and nature are facing. To achieve these ambitious goals, immediate action is necessary. This day workshop was essential to empower students from developing countries to be a step ahead to help our countries reach their highest potential. I urge all future leaders to work together and help each other to paint a better future and a better world for all of us.