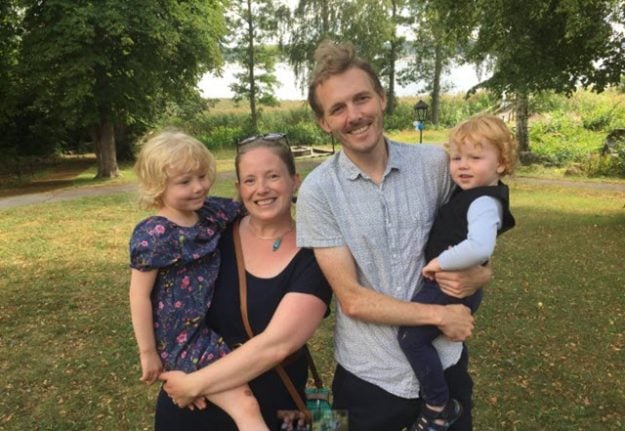 Sweden was never on the Brit's radar as a place Campbell would wind up living: “I'd always thought I'd live in Germany, because I speak German, but when my husband was awarded a place on a PhD at Uppsala University, we changed our plans.”

In 2014, the former language teacher moved to join her husband in Uppsala with her then seven-month-old daughter in tow – and very few expectations of the country she was taking up residence in. “I'd never been to Sweden before we moved over. For us at that time it was a really exciting adventure.”

“And actually, when we came over here, we thought it'd be for a fixed period and then we'd move back to the UK. What we hadn't reckoned with was how much we'd really love Sweden.”

Unsurprisingly, given her background as a language teacher, Campbell embarked upon learning Swedish with enthusiasm. And rather than restricting her practice to the classroom, Campbell put her newly learned words to use wherever she went, from cafés to preschools.

“I'm a total languages geek. I really went for it – I did the whole learner thing: bought a phrasebook and tried out the words in it everywhere we went. The place I found most opportunity to speak was my children's open preschool – which I would recommend to all parents in Sweden as a place to meet people. I also went to a conversation group at the library.”

Reassuringly for those not gifted in picking up new languages, Swedish didn't come immediately for the now-PhD student. “At the beginning, when I was around Swedish friends, I'd formulate something to say in my head, but by the time I'd thought of it, the conversation had moved on. I'd be sat there silently, trying to catch up!”

NEWSLETTER: Sign up now for regular updates from The Local Jobs Sarah Campbell and her family have been in Uppsala since 2014. Photo: Mark Harris/imagebank.sweden.se

“The main thing was that I met so many brilliant people who would listen and be really patient when I was trying to learn Swedish. They'd wait while I was trying to get these really clunky sentences out. There was a lot of observing other people speaking in Swedish; it's a great way of taking the language in.”

Being happy to try out her Swedish skills didn't leave Campbell immune to the rite of passage for any newcomer: the cultural misunderstanding. “One particular moment sticks in my mind, from the first few weeks here, I'd thought: 'I've heard of 'fika', we must get one'. So, we went to a café in town, I ordered my coffee and waited and waited for it to be delivered to my table. Then, after about 20 minutes, I went over to ask where it was.”

“The person behind the till looked at me like I was mad; I hadn't realized that in Sweden you go and get your coffee yourself. It was a moment of 'Ah, I don't understand how things are done here!”

She persisted and now is comfortable in Swedish in most situations. And persisting is something Campbell is passionate about, having made it her mission to encourage non-natives to speak Swedish, regardless of their ability.

“So many people fall into the trap of thinking that their words aren't worth anything if they're not grammatically correct – but that's just not true. Don't wait until you're fluent to speak. You have the right to practise, whatever your level. This is something that I'm almost evangelical about.”

“You've got to really be prepared to give it a go. To force yourself, even when it gets tough. Even in those times where you think 'I thought that what I said was really brilliant, but I got a blank look'. It's easier said than done, but it's really true. It'll take you further than you could know.”

It was this belief that proved to be the kernel of inspiration propelling Campbell into her career as an author. She's just published her first book, 'Swedish for parents: language for life with a young family in Sweden', which is designed to give the benefit of her experience as support to those just arriving in the country.

“I wanted to write a book that would give parents the words that they specifically would need to establish a life here. Initially, when I pitched the idea to my now-editor it was meant to just be a bit of a glossary.”

But, as the Brit began writing, she found the concept was evolving and turning into something unexpected – a holistic guide. “It's really the book I wish I would have had when we came over. It's got everything from family-specific vocabulary to layering tips around what to dress your kids in in the winter. That's a tricky one for people not used to the Swedish weather!”

As for the response to the book? Despite only being released in early February 2019, it's already proving popular. “We landed up in the Bokus bestsellers list over the weekend it was released, which felt brilliant. The response has been really positive; one reader said that it made them feel less alone. That's incredible to hear.”

For those coming to the country, Campbell's advice is practical: “Know where you're going to live. That's the one thing that's really hard about Sweden. We assumed – naively – that we'd be able to go into a lettings agent and say 'here's our deposit'. That's absolutely not how it works. So, make sure you've got options; put your feelers out before you get here.”

Her second piece of advice is harder to plan for: “Come with an open mind and come prepared to make the most of things. Lots of people have an idea of what life in Sweden in life is like – and that's not always accurate. You're likely to find it's different to how you might have thought it would be.”

Reflecting on her almost-five years in the country, Campbell has found unexpected and welcomed opportunities in Sweden. In April 2018, she was given a place on a competitive PhD programme at Uppsala University. “I thought I'd missed the boat to study a PhD. When I moved over here, I was looking to move away from teaching, to start my own business, with a little bit of copywriting and translating. But when I saw this PhD I knew I had to apply; I think the book was a big part of my being accepted onto the programme.”

“Though I'd always loved writing, I never imagined I would actually become an author. For me that was something other people did, it was a different world to the one I occupied. But in Sweden everything led naturally to this point. To throw out an old cliché, it's like a dream come true.”

The symmetry of Campbell's journey in Sweden doesn't escape her. “On the first day we were here, we went to the library and got a library card. And now my book's stocked on the shelves of that same library. It really feels like everything's come full circle.”