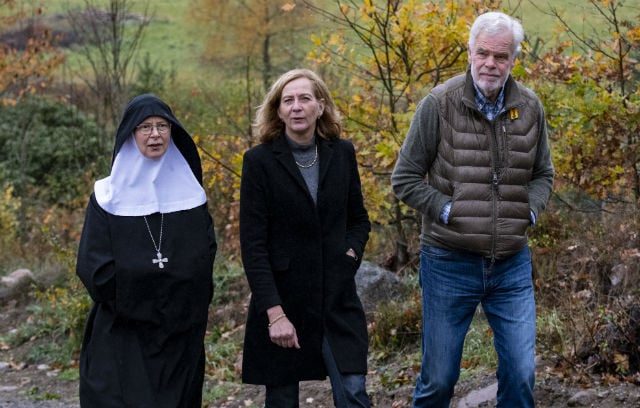 Mother Christa Claesson, Anita Ullman and Carl Piper from VetoNu. Photo: Johan Nilsson/TT
A court in Luleå has dismissed the challenge against drilling permissions granted to the company, which had been mounted by the conservation network VetoNu.
The group includes Mother Christa Claesson, Abbess of the Mariavall nunnery, and Carl Piper, the so-called 'red earl' of Christinehof Castle.
They were joined in the court challenge by almost 100 others, including a group of local municipalities and the Skåne regional government.
READ ALSO: Nun and earl fight British mining project in Skåne
Claesson said she and others may yet appeal the court's verdict.
“We shall first wait and see how others think we should act. I'm wondering to some extent if the way comes to an end now or not,” she told Sweden's state broadcaster SVT.
“The mineral law is a crazy law which is used in a peculiar way:  We have the right to make a challenge, but the law is written in such a way that the landowners will never get their challenges through.”
Anita Ullman, VetoNu's chair, told the broadcaster that though disappointing, the verdict had not been unexpected.
“We were expecting a dismissal because the law on mineral development does not take into account other interests,” she said. “It was the same thing with Shell a few years years ago, which we challenged up to the highest level.”
ScandiVanadium has been granted 11 exploration licences across eastern Skåne and plans to drill a series of small 125 metre deep bore holes to investigate the Dictyonema Shale Formation which crosses the municipalities of Hörby, Tomelilla and Simrishamn in eastern Skåne.
If the bores identify a promising location, it intends to establish a quarry where it will mine the rare earth metal, which is used in batteries.
British geologist David Minchin, the company's chief executive, previously told The Local he was driven to start the company because of his interest in Vanadium redox batteries.
The batteries can have an operating life of more than 20 years, much longer than lithium batteries, and are 100% recyclable, making them an important future technology for energy storage.