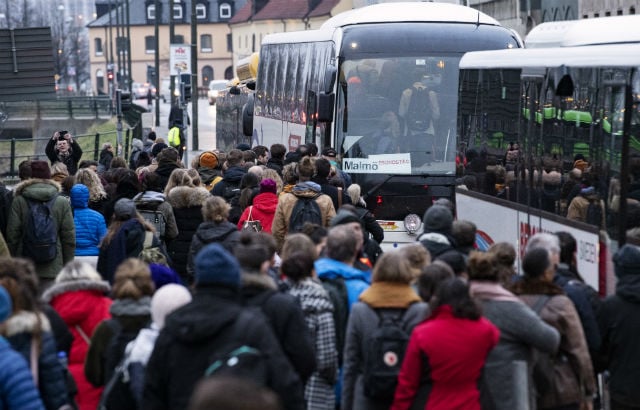 The fault caused transport mayhem in Malmö on Wednesday evening. Photo: Johan Nilsson/TT
The man, who was working on a project to increase the link between Malmö and Lund from two to four tracks, did not notice his mistake, leaving the Swedish Transport Administration to spend hours trying to find the source of a signal fault.
On its website, the agency said that rail traffic had been “affected across the whole of southern Sweden”.
“The consequences were enormous,” Annika Canaki, head of division at the Swedish Transport Administration, told state broadcaster SVT.
“We normally use instruments to see what there is under the ground, but from now on we are going to take further measures. We should perhaps dig more by hand.”
The signal fault was announced at 6.30pm on Wednesday evening, and it took until 6.30am on Thursday before the severed cable was identified.
Anyone wanting to take the train back to Lund was first told that the service would resume at 11.30pm, then at midnight, then at 4am, and finally at 9am.
“We realized in the middle of the night, when we had a meeting, that we didn't want to risk giving an uncertain prognosis ahead of the morning rush, so we went for 9am,” Canaki said.
The problem was compounded by a shortage of replacement buses, meaning many passengers were left to make their own way to Lund.
As many as 20 buses were dispatched to take commuters from Malmö to Lund on Thursday morning.
For unrelated reasons, the Swedish Transport Administration announced on Thursday that it would cancel several trains in southern Sweden from Friday afternoon, as national weather agency SMHI issued a class-two (on a scale from one to three) warning for wind speeds of up to around 100 kilometres per hour.
People travelling by train in the region are advised to check recent updates on Skånetrafiken's website.