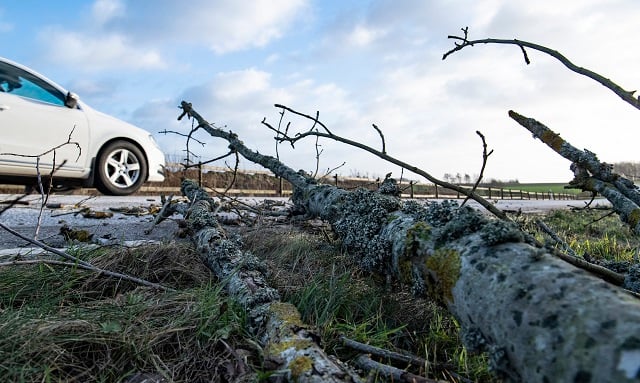 Trees could be knocked over by heavy winds. File photo: Johan Nilsson / TT

Swedish weather agency SMHI issued a class 2 warning for storm-level winds across Skåne, caused by a low pressure front that earlier moved in from the west.

Because of the winds, the Swedish Transport Administration has cancelled train routes in the affected areas from 2pm on Friday afternoon. It's not clear when these routes will start up again, but the agency said it would likely be no earlier than midday on Saturday, after railway tracks have been inspected and any necessary repairs carried out.

High speed trains run by SJ between Malmö and Gothenburg will also be diverted due to the weather, and therefore won't go through Helsingborg.

SMHI warns that gusts at this level can cause trees to fall and may even lead to power outages if power lines are damaged. The winds are expected to be intense, but fortunately short-lived, with meteorologists predicting that they will be at their strongest from midday onwards but will calm down later in the afternoon.

“It's a case of wind speeds of around 25 metres per second, just over the border for what we define as a storm,” said SMHI meteorologist Lars Knutsson. “If it was a little bit lower, there wouldn't be a Class 2 warning.” Skåne isn't the only area with a forecast of windy weather on Friday. A Class 1 warning is also active for strong winds in Halland, southern Småland, Blekinge and Bohuslän, where winds were expected to be strongest on Friday afternoon before calming down overnight.

There is also a Class 1 warning for snow in most of northern Sweden from Dalarna upwards, which could cause problems to transport in these areas.

“In some areas there could be several decimetres of snow, so it can be tricky,” said Knutsson.

The following ten days are expected to be varied in terms of weather, with a mixture of snow, rain, and sunshine across the country.

READ ALSO: Malmö might not have a winter this year