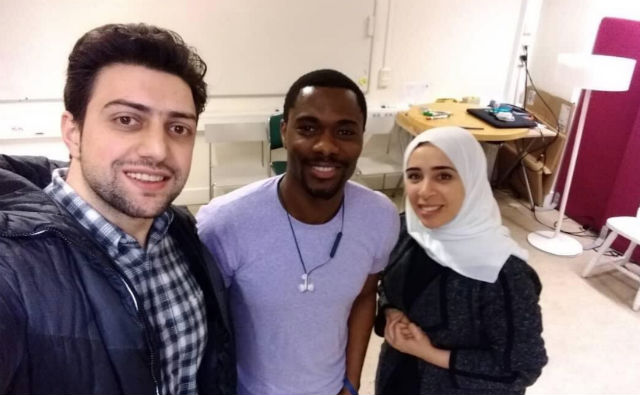 Photo: Participants at the screening of 'The Minimalist"
The objective of the movie by Carlos Funes was to invite participants to think about the concept of minimalism. The film demonstrates that a lot of the things we have are unnecessary and that the media enhances their ‘importance’. Yet, they are not indispensable, and it is possible to live in a minimalist way. The reason for selecting this movie was to spark thoughts and discussions on this topic and how minimalism can serve as a path to a more sustainable lifestyle as waste and pollution should be reduced, and resources should not be so overstretched due to constant production.
The screening began with a warm welcome and introduction by Batool Banihani, an SI scholar, who introduced our sponsor, the Swedish Institute and what they do as well as talked about the objective of the evening. Photo: Participants at the screening of 'The Minimalist'
After the movie, Luong, another SI scholar led the group towards reflecting on what sustainability and minimalism mean to them. The question he asked was the following:
“If all of our sustainability efforts failed and you had to choose a post-apocalyptic scenario, what would that be?”
The objective of this question was to have participants have the opportunity to reflect through the reality of having to live in a world where all resources are depleted, and everything is exceptionally scarce and ugly.
Some of the scenarios imagined by the participants were:
– Everything will slowly run out, and people would have no choice, but to kill each other.
– Things would run out, and people would be forced to collaborate. Trade would have to be about service and knowledge as currency rather than money.
– A new mental model would be created to give hope to people.
The participants were then asked to give their reflections about the film and the concept of minimalism. Below are some of the feedback:
“I am happy to see that there are normal people who are being minimalist. They have a car and a phone, but they keep it minimal. In Sweden, the people I meet who minimalists are are extreme in that, they are not part of society as they have excluded themselves and for that reason, I have not desired to be a minimalist.”
“I am in the middle as I do not spend too much and neither am I too minimalist, and I do like to own quality over quantity. I will spend and get more quality things, so I own less.”
“I will consider if I need what I want to buy because right now I am moving out and realised I have so much stuff that I do not need.”
“I have been trying to be minimalist for the past 15 years. I do not replace my things so often. I live with what I have.”
“I am a Buddhist so for me, the path to freedom is about owning less.”
“Sweden makes me relate to a lot of things as I have learned it is possible to be a minimalist.”
After this session, another question was asked to the audience:
“Remember a time when you had to let go of something to realise that something else is of more importance?” Photo: Participants at the screening of 'The Minimalist'
The session was carried out in teams of three. Some of the stories shared were as follows:
“I tried to channel my energy into fixing a relationship that was not working, and it consumed me. When I found it was not going to work, I threw myself into my, and the company became everything I needed.”
“My parents used to take care of me, but when coming to Sweden, I realised that I am on my own and am starting to understand the value of things, so I ask myself the question ‘do I need this?”
“I owned a Swiss knife which showed me that I do not have to have so many things and only need to invest in practical things that can serve more than one function. I thought I had to have all these different pieces of utensils and appliances, but after I had to let go of them all during my divorce, I realised simplicity is more important.”
“Moving to a new country and having to let go of material things back home makes you realise you don’t need so much.”
The intention for this screening was to inspire the audience to practice actions in their daily life that would lead to sustainability. Minimalism was the approach we used, and this was done through screening a movie that talks about the concept of minimalism and offers practical tips on how to do so. We hope that this is carried forward by the participants and they were inspired to think twice before purchasing anything and decide if it is something that they need or want.