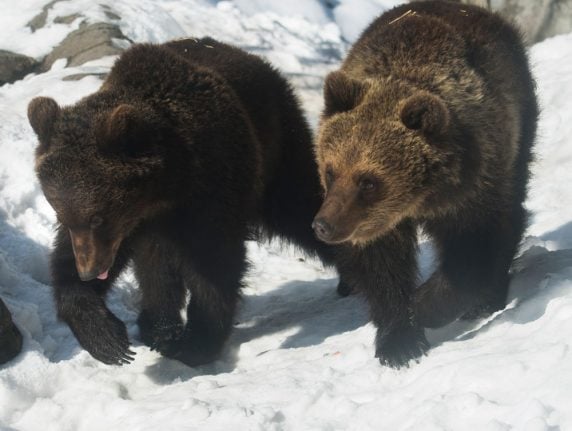 File photo of the brown bears at Skansen zoo in Stockholm. Photo: Fredrik Sandberg/TT
At Orsa Rovdjurspark in central Sweden, all but one of the park’s brown bears have been up and about for a few weeks now.
The predator park, which at 325,000 square meters is the largest of its kind in Europe, posted a video to social media last week showing three adult brown bears frolicking in the snow after leaving their enclosure.
Park officials said that some of the bears had already been awake for weeks when the video was posted on March 9th. The bears are active significantly earlier than normal, as it usually not until well into March or even April that they awake.
“It has been a rather mild period and we believe that has contributed to them waking up earlier than normal,” park director Johan Larson told broadcaster SVT.
Only one mother bear remains in the den, but she has a good excuse for not getting out to romp with the others.
“She had three cubs after Christmas. So she’s still sleeping on and off,” Larson said.
Vocabulary
björn – bear
vintervila – hibernation
vaken – awake
sova – sleep
veckor – weeks
We're aiming to help our readers improve their Swedish by translating vocabulary from some of our news stories. Did you find this article useful? Do you have any suggestions? Let us know.