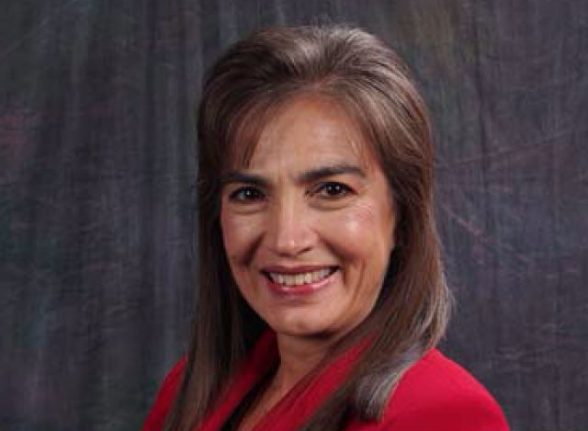 Sandra Alba Cauffman was just seven years old when she made up her mind that she wanted to go to the moon. Wide-eyed, she tuned into the televised landing of Apollo 11, the first spaceflight to land people on the moon, and from that moment on she knew what she wanted to do with her life.

“That’s what got me thinking, ‘I want to be a scientist, or an engineer, or something that can get me to the moon’. Well, I never went to the moon, but I like what I do, and I work with a lot of people who go into space, so it’s exciting,” says Cauffman.

Born and raised in Costa Rica, the odds were against Cauffman realising her dream. Girls rarely pursued careers in engineering and her teachers even stopped her from studying the field of engineering she was keen to enter.

“I wanted to study electrical engineering at university, and they wouldn’t let me. So the setback cost me seven years because I had to start in the wrong major. Then, when I was finally able to go to the United States, I was able to study what I wanted,” she told SI News.

This setback, she admits, was probably the most significant one. But it wasn’t the last.

When she started her career, she had to overcome yet another hurdle — this time, pervasive unconscious bias towards women. Over the years, Sandra has learned one invaluable lesson: to speak up when faced with sexism and unfair treatment. Photo: Sandra Alba Cauffman during her speech at the Women in Tech event in Stockholm

“I learned to speak up and say ‘I went to school, I have an education, I contribute in the same way you can contribute. And I can speak for myself. You don't have to speak for me’,” she says, adding that “you have to tell men immediately when they do or say something, you just have to tell them.”

Cauffman is now an outspoken supporter of teaching girls from a young age that they can do anything they set their minds to.

“When you want to motivate kids you have to start when they’re little because then you create that image” she says.

She suggests saying to girls: “Yes, math is fun, you can do things with your hands, and you can build circuits, or you can code.”

She admits that the situation for women in tech is better but it’s far from perfect.

“We always get to a level where we are not getting the recognition or the promotions,” she says.

Indeed, stereotypes persist, even in the progressive tech field. “There is still a bias that men make better leaders and that has to change,” she says.

Beyond the bias, Sandra believes women need to rethink what they can achieve.

“Sometimes we make our own barriers too. We don't want to do something because we don’t think we’re as qualified. We have to change our ideas too. If you think you’re qualified for something, then go ahead and do it,” she reiterates.

She believes the emotional pressure women deal with is another issue hindering their professional growth.

“I think we are the caregivers too. We want to be split into too many places. We have kids, and we have the nurturing ability, we multitask a lot. It’s not that we don’t have the confidence, it’s just one more thing we have to worry about,” she adds.

Sandra argues that changing mentalities and biases starts at home: “When my husband comes home from work, if I don’t ask him to make dinner, he doesn’t think about making dinner. I have to ask him. So it’s just those things that play into what we do, and we are going to have to change some of those attitudes in our household too,” adding “I have two sons and they know that’s how they have to contribute in the house.”

She offers parting words for all women wanting to pursue careers in the tech world: “Don’t be afraid, find your power within and you can do anything that you set your mind to do.”