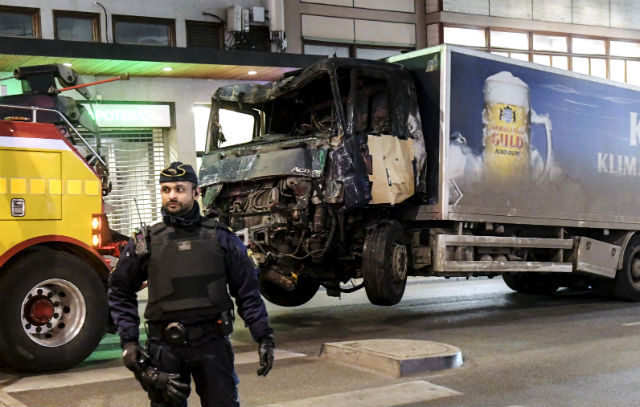 A policeman stands in front of the truck used in Rakhmat Akilov's 2017 attack. Photo: TT
“The problem is that violence by far-right extremists never gets the same amount of coverage in the mainstream media,”
Hans Bruun, from the Defence Defence University, told Swedish broadcaster SR.
“But instead it gets lost in the din of the debate on Islamic State, people going to fight for Islamic State and everything else that gets discussed.”
Brenton Tarrant, the 28-year-old responsible for Friday's terrible mosque attack in Christchurch, New Zealand, claims to have drawn inspiration from the Norwegian extremist Anders Behring Breivik (who now goes by the name of Fjotolf Hansen).
According to Sweden's Säpo security police, there are currently around 3,000 violent extremists in the country, of which around 2,000 are Islamic extremists, with the rest coming from either White Power or neo-Nazi groups, or from the extreme left.
But in Sweden, the death toll from far-right terrorists is significantly greater than that from Islamist attackers, with the five dead and 14 injured in 2017's Stockholm terror attack the only people to suffer from Islamic terrorism on Swedish soil.
“What we see not only in Sweden but also at the European level is that the number of victims from far-right attacks has been growing recently,” journalist Anna-Lena Lodenius told SR.
Here are some of Sweden's most serious far-right attacks:
This list could be considerably longer if it was expanded to include all murders and assaults carried out by members of far-right extremist groups.
And here are are the two Islamist attacks: