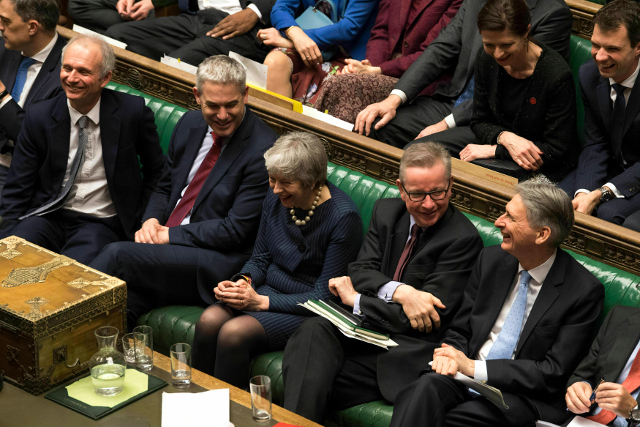 The first part of The Local's interview focuses on the rights of Brits in Sweden. Read it here.

Dahlgren said he had been following the developments in the British parliament both on TV and by reading a range of English-language newspapers.

“It's fascinating, of course, for a political nerd like myself – how lively it is and how eloquent these speakers are in the exchange of arguments,” he commented. “But it's also a very serious situation.”

“It's frustrating every time [the British parliament] say no to something that we have agreed on with the government, of course. There have been lots of noes. So let's see what happens next.”

The minister stressed that there was a serious risk of a no-deal Brexit, which “would create problems all over the place”, including with the introduction of border controls and customs duty at Sweden's ports.

He also told The Local that he did not think the media were creating unnecessary drama over Brexit: “I don't think they need to create drama, what's happening in real life is drama in itself.” The next stage in the negotiations is a parliamentary vote on the agreed exit deal expected on Tuesday, but this will only happen if British Prime Minister Theresa May is able to gather enough support for the deal to pass. Whether or not this happens, the UK is expected to request an extension to the previously agreed two-year period which runs out on March 29th.

“If there is a well argued reason that the UK presents, then I don't think anyone really wants to resist such a request,” Dahlgren told The Local.

“The decision needs to be taken by the European Council unanimously, but I think as Donald Tusk said, we should be open for a longer extension if there is an argued reason for doing so. And if they want to remain in the European Union for a longer period they also have to elect members of the European Parliament, so this must be part of the whole plan, because the elections are in May.”

“But just to have the process going on and on and on without any plan for what the options on the table would be, that's not very attractive.”

The minister said he did not anticipate any further negotiation on the withdrawal agreement during any extension, but said that the EU and UK could begin to negotiate about their future relationship. Dahlgren said that his preference would “of course” be for the UK to stay within the EU, but that Sweden and the EU respected the decision made on the basis of the 2016 referendum.

“If [the British parliament] wants a second referendum, then it will happen – it's their sovereign decision and it's not for us to have any views on that,” he said when asked his stance on the campaign for a second public vote.

The Local pressed the minister for answers about the status of British citizens living in Sweden beyond an agreed one-year 'grace period' during which they will be exempt from residence and work permit requirements.

But Dahlgren said that it was not clear who would be eligible for permits after this year, and stated that it was not possible to negotiate this before it was known whether the UK would be leaving with a deal or not.

“I cannot answer that question because we don't know exactly what the rules will be at that time,” he said. Dahlgren, 71, has been working at Sweden's top political level since the 1970s. Photo: Pontus Lundahl/TT

Across the EU, other countries have made varying guarantees to British residents.

Spain and France, for example, have said that Brits resident for less than five years at the time of a potential no-deal Brexit will likely need to meet as-yet unknown income threshold, while Malta has guaranteed a ten-year status for all Brits resident on the date of the UK's departure and Poland will offer permanent residence to those with five years' residence in Poland, and a temporary three-year permit to those with fewer years in the country.

Sweden is one of the few countries not to have outlined any plan for potential permits beyond the transition or 'grace' period, but Dahlgren said the government would follow developments and was ready to take further decisions on Brits' long-term status if necessary.

He also said he was optimistic that the UK and Sweden would continue to have “the best possible relationship” and a continued exchange of workers and students.

When asked if he could offer any reassurance to those Brits with uncertain futures in the event of a no-deal Brexit, Dahlgren emphasized that for one year their rights would remain unchanged but that beyond that it was unclear what rules would apply.

“I'm sure that during the negotiations that follow, we'll make every effort to facilitate for UK citizens now living in Sweden to have as easy an access to this country as possible. But the details of this have to be worked out during this grace period,” he said. “There is no sense of revenge here. We regret the outcome of the referendum but we will build on what we have, and we hope that we will have an orderly exit.” Dahlgren, a seasoned foreign policy adviser who has worked for four different Swedish prime ministers, has like many Swedes a personal relationship with the UK, having also spent a summer working in a Welsh candy shop in the 1960s and later working as a TV and radio correspondent in London.

“I made a lot of trips to Belfast during that time and got to know about the Troubles in Northern Ireland firsthand, so I really understand why the UK side and Irish side want to avoid this hard border, and why the Good Friday Agreement of 1998 is so very important,” Dahlgren told The Local.

Asked if he would want to be a TV correspondent in London at the moment, Dahlgren laughed and said: “Oh, that would be a great job! But I have another one to take care of right now.”

Once an agreement has been reached with the UK, the minister said, “we have to do a lot of other things in the EU. We have so many big things on our agenda here.”

Dahlgren said that two key priorities for the EU were improving the employment rate across the continent, particularly among younger people, and defending European values.

“The European Union was built on respect for democracy and the rule of law and freedom of expression. These values are being challenged to an extent that we haven't seen before in some of our European countries, and they even have a direct political influence in a few of them, in the government. Not in Sweden, but in several other countries we've seen political influence from the extreme right and this is a serious situation. Those of us who stand on the decent side of the political spectrum should be more active in promoting these values and defending them.”

Dahlgren also said that Sweden was making an effort to strengthen relations with other countries in the EU; the departure of the UK means that Sweden is losing the country it has voted in line with more than any other.

He named France, Germany and the Netherlands as three countries Sweden was working closely with, and added: “We also work with countries where we might not share the same view on one field but we are very like-minded in another field. It's not the case that there is a particular favourite nation.”

Hundreds of billions of euros and counting have been shelled out since Russia invaded its pro-EU neighbour in late February.

Governments have gone all out: from capping gas and electricity prices to rescuing struggling energy companies and providing direct aid to households to fill up their cars.

The public spending has continued, even though European Union countries had accumulated mountains of new debt to save their economies during the Covid pandemic in 2020.

But some leaders have taken pride at their use of the public purse to battle this new crisis, which has sent inflation soaring, raised the cost of living and sparked fears of recession.

After announcing €14billion in new measures last week, Italian Prime Minister Mario Draghi boasted the latest spending put Italy, “among the countries that have spent the most in Europe”.

The Bruegel institute, a Brussels-based think tank that is tracking energy crisis spending by EU governments, ranks Italy as the second-biggest spender in Europe, after Germany.

Rome has allocated €59.2billion since September 2021 to shield households and businesses from the rising energy prices, accounting for 3.3 percent of its gross domestic product.

Germany tops the list with €100.2billion, or 2.8 percent of its GDP, as the country was hit hard by its reliance on Russian gas supplies, which have dwindled in suspected retaliation over Western sanctions against Moscow for the war.

Spending to continue rising
EU countries have now put up €314billion so far since September 2021, according to Bruegel.

“This number is set to increase as energy prices remain elevated,” Simone Tagliapietra, a senior fellow at Bruegel, told AFP.

The energy bills of a typical European family could reach €500 per month early next year, compared to €160 in 2021, according to US investment bank Goldman Sachs.

The measures to help consumers have ranged from a special tax on excess profits in Italy, to the energy price freeze in France, and subsidies public transport in Germany.

But the spending follows a pandemic response that increased public debt, which in the first quarter accounted for 189 percent of Greece’s GDP, 153 percent in Italy, 127 percent in Portugal, 118 percent in Spain and 114 percent in France.

“Initially designed as a temporary response to what was supposed to be a temporary problem, these measures have ballooned and become structural,” Tagliapietra said.

“This is clearly not sustainable from a public finance perspective. It is important that governments make an effort to focus this action on the most vulnerable households and businesses as much as possible.”

Budget reform
The higher spending comes as borrowing costs are rising. The European Central Bank hiked its rate for the first time in more than a decade in July to combat runaway inflation, which has been fuelled by soaring energy prices.

The yield on 10-year French sovereign bonds reached an eight-year high of 2.5 percent on Tuesday, while Germany now pays 1.8 percent interest after boasting a negative rate at the start of the year.

The rate charged to Italy has quadrupled from one percent earlier this year to four percent now, reviving the spectre of the debt crisis that threatened the eurozone a decade ago.

“It is critical to avoid debt crises that could have large destabilising effects and put the EU itself at risk,” the International Monetary Fund warned in a recent blog calling for reforms to budget rules.

The EU has suspended until 2023 rules that limit the public deficit of countries to three percent of GDP and debt to 60 percent.

The European Commission plans to present next month proposals to reform the 27-nation bloc’s budget rules, which have been shattered by the crises.