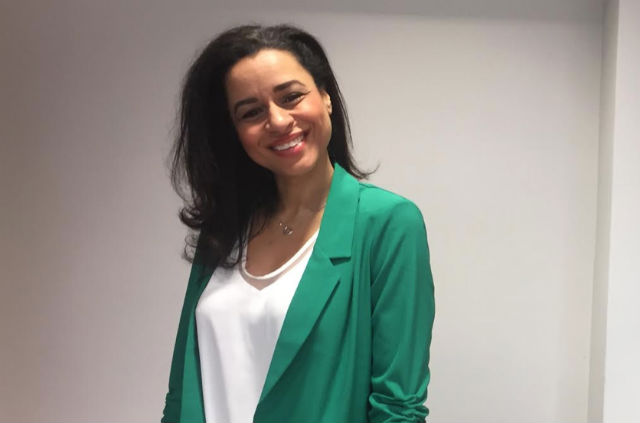 From comedy to public speaking, podcast host and best-selling author Sarah Cooper is a Jill-of-all-trades.

Cooper’s most recent book How to Be Successful Without Hurting Men’s Feelings is a humorous tome that teaches women how to survive in the modern workplace through comics and tongue-in-cheek suggestions.

“I don’t think a lot of men understand what it's like for a woman to be the only woman in the meeting and that they have to kind of fight to be heard and be a part of things,” she says, adding that “as a woman leader you’re often confronted with having to tiptoe around the male ego.”

Cooper argues that the way many women were raised has impacted their behaviour at the workplace. “Growing up as women we’re often taught to think about others before we think about ourselves. And often that means putting ourselves second,” she says. Photo: Photo: Sarah Cooper during her speech at the Women in Tech event in Stockholm

Indeed, many women often feel they have to ingratiate themselves with their colleagues or managers by always saying ‘yes’. This is a hurdle Cooper encountered many times while working at tech behemoths Yahoo and Google.

“It’s so hard for me to say no to something, even though it’s something I don’t really want to do because I want to please other people,” she says.

Cooper has found her way out of being a people-pleaser and instead focus on her professional goals.

“One thing that has helped is just creating a mission for myself, creating a thing that is important to me. And if I’m asked to do something I just look at that mission and I think ‘does that thing helps me do what I want to do?’ And if it doesn’t, I just say no,” she adds.

Cooper suggests that women should take advantage of their innate qualities such as their listening skills, and use them to change the workplace and rise to become fantastic leaders.

“We should lean into the things that we naturally do, and I think that will actually propel us forward,” says Cooper. “Tech is a good place for women to be. More than ever.”

Cooper’s advice for women wanting to step into the tech world is to find support within their community. Networking, she argues, will help women stay in technology rather than walk away from it.

“Find a group for people who you admire, who may be going through some similar things and who support each other,” she advises.