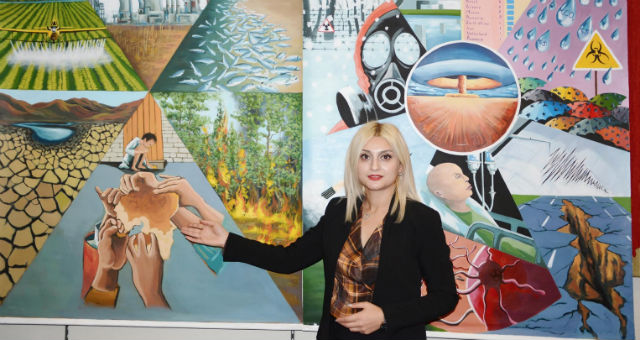 It was an honour for me as an SI Scholarship holder at Halmstad University to make a speech on International Women’s Day and showcase an exhibition presenting women’s voices from conflict zones in front of many Swedish women who firmly stand for their rights.

I am a peace-builder — a master's student in Nordic welfare at Halmstad University doing my master's in Nordic Welfare, as well as a Swedish Institute scholarship holder. I come from Azerbaijan, from a conflict zone. Although I am not a direct victim of the conflict between Armenia and Azerbaijan over Nagorno-Karabakh, I grew up among the victims of the Nagorno-Karabakh conflict, refugees and internally displaced people. I have witnessed the devastating impact of armed conflicts on women and children.

By moving to Sweden and studying Nordic Welfare, I have found an inclusive society where everyone’s rights are respected and protected.

I remember a trip with the director of the SEEP program within Halmstad University. While moving some boxes, the program director held one heavy box and when other students and I tried to help her, she didn’t let us help her, and just said ‘I am a woman and I can carry it.’ It deeply touched my heart to see a woman who has discovered her strength and is proud of being a woman.

I firmly believe that today, Swedish women should be seen as role models for other societies. The Swedish society achieved this level of human development not just by political will but also by societal will. In my exhibitions during International Women’s Day this year, I have used the art of others to emphasise the importance of respecting and protecting the rights of women who are internally displaced persons and refugees. It is imperative to enhance and strengthen the participation of women in peace processes and negotiations during ongoing violent conflicts.

The exhibition, previously shown in the European Parliament contains pictures showing people in the conflict areas of Nagorno-Karabakh, Myanmar and Kashmir from eight different photographers.

The protection of vulnerable groups should be an absolute priority in any internal displacement situation. It must be remembered that acts of displacement (for example with the Nagorno-Karabakh or Rohingya populations) violates the human rights of those affected, resulting in a loss of access to homes, lands, personal documentation, family members, and pre-existing social networks, amongst many other things. Unresolved conflicts should be a matter of concern for states, international bodies and NGOs. Long-lasting conflicts and wars in one part of the world, directly and indirectly, affect other parts of the globe.

Women have to play a crucial role in crisis prevention, peacemaking and peace-building as they suffer a great deal during conflicts. The number of women negotiators, witnesses and signatories to peace agreements remains astonishingly low. Without a gender perspective, peace processes and negotiations lack substance, which may jeopardise their very sustainability.