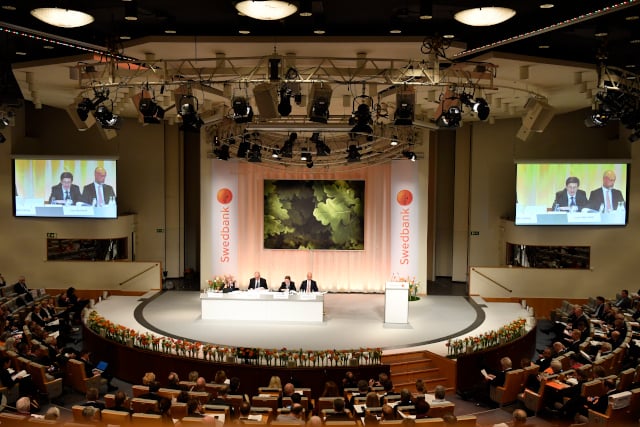 “The developments during the past days have created an enormous pressure for the bank. Therefore, the board has decided to dismiss Birgitte Bonnesen from her position,” chairman Lars Idermark said in a statement.

Chief financial officer Anders Karlsson will serve as acting CEO until a permanent replacement is appointed.

“It's been a dramatic morning. As chairman (of the board of directors) of Swedbank, I regret this deeply,” Idermark told shareholders as they gathered for their annual general meeting.

READ ALSO: What we know about the Swedbank money laundering scandal

At the same time, Swedbank's share was suspended from trade in Stockholm after losing a quarter of its value since February 18th, the day before the reports of money laundering emerged. It has lost 30 percent of its value since its peak this year in mid-January.

The stop on trading was lifted again shortly before 4pm.

According to tabloid Aftonbladet, Bonnesen, whose position became untenable as the share price tumbled on Thursday, will receive a golden parachute of 21.5 million kronor ($2.3 million).

The developments came a day after Sweden's economic crime authorities raided the bank's headquarters outside Stockholm in an insider trading case.

Swedbank is suspected of favouring its 15 biggest shareholders by informing them two days in advance of a documentary that was to air on Swedish television claiming the bank was involved in money laundering.

The documentary, made by an investigative news programme for Swedish broadcaster SVT, alleged that at least 40 billion kronor ($4.3 billion) of suspicious transactions had been channelled to Baltic countries from Swedbank accounts.

According to SVT, many of the suspicious transactions took place between 2007 and 2015, and some of the money may have first gone via Danske Bank, which is at the centre of a giant money laundering scandal.

Economic crime authorities have launched a preliminary investigation into Swedbank for insider trading and fraud, but have yet to do so for the money laundering allegations.

SVT on Tuesday claimed that Swedbank had failed in its efforts to combat money laundering.

An internal Swedbank report obtained by SVT claimed that many of the bank's “high risk customers should never have been approved”, and, in some cases, the bank “did not even know who the real owners of the accounts were, nor where the money was coming from”.

Swedbank said the report was included in an external report it commissioned.

On Wednesday, SVT also claimed Swedbank withheld information from US authorities regarding suspicious customers and transactions in the Panama Papers scandal, in which thousands of clients around the world moved money offshore to protect it from taxes.