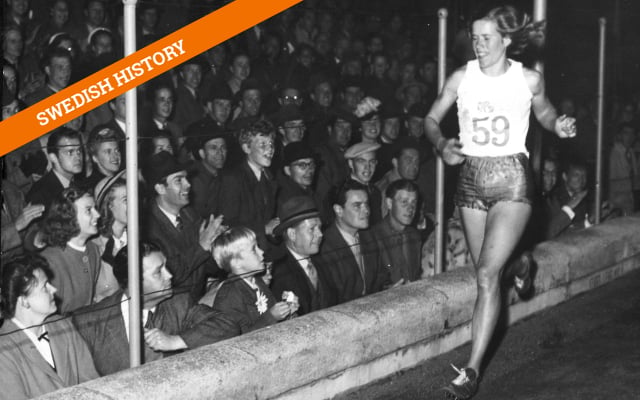 On August 30th, 1945, 23-year-old Anna Larsson made running history in a way that is rarely recognized outside of Sweden. Within Stockholm's Olympic Stadium, she broke the world record in the 800-metre women's race, besting the two previous records she had already set since August 1944.

But this was not the most groundbreaking thing she did that day. Immediately afterward, she became the first woman to run a lap of honour in the stadium. And she did so while receiving a standing ovation.

Though it may sound trivial today, at a time when women were barred from running the 800 metres in the Olympics because they were considered “too frail”, her accomplishments and the recognition she received for them were profoundly significant. Far from being frail, Anna Larsson wasn't just a powerhouse, she was also a natural runner who broke the Swedish record in the 800 in her first national race in 1943. Not bad for a young woman who worked on her family's farm just outside Nora in Örebro county, and whose talent was discovered completely by chance at an exercise competition earlier that year.

Recruited to the club IFK Nora, she earned the nickname Nora-Anna, and quickly became a national idol of competitive running. And for good reason. In addition to her four world records (she also won the record in the 880-metre race in 1945), in the seven years she ran the 800 in the Swedish championships, she never lost a race.

An obituary posted on the website of the Swedish Track and Field Association (Svenska Friidrottsförbundet) following her death in June 2003, described the secret to her success as a “… combination of high sporting class (several world records in the 800m), personal charisma ('she runs in an extraordinarily beautiful style' wrote the Nordisk Familjeboks Sportlexicon) and an unlikely, almost mythical-like career where she in no time went from anonymity to world class”. To put her accomplishments into perspective, Anna's world record time of 2.13.8 in the 800-metre race held until 1950, and her time in the Swedish championships wasn't broken until 1969. Her victory lap in Stockholm's Olympic Stadium in 1945 is also more profound since it wasn't until 1960 that women were finally deemed capable enough to be allowed to run the 800 metre in the Olympic games for the first time since 1928.

Even then, the bias against women in running was still alive and well. Women continued to face major obstacles to full and equal participation in competitive running into the 1970s (and in some parts of the world, until very recently), a fact that is often written about in histories of the sport.

While many women runners from more modern times are celebrated in these histories, few if any outside Sweden recognize the Swedish “farm girl” who spectacularly demonstrated women's strength and ability as runners, and was celebrated for it in her own time.