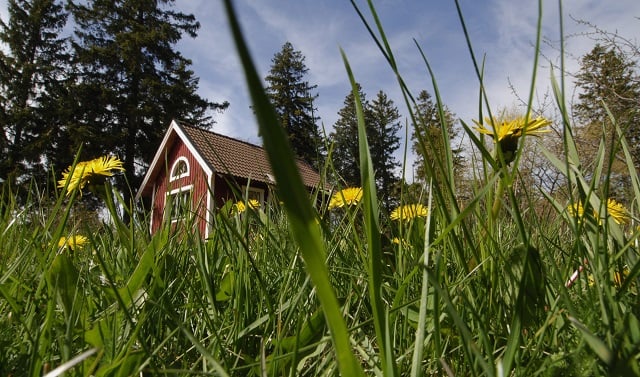 Grass and flowers outside a cabin. File photo: Hasse Holmberg/Scanpix/TT

“It's very dry and there's a risk that fires could start,” said Linus Dock at Sweden's state weather forecaster SMHI. “It's quite common at the start of spring, after the snow has melted and the grass from last year has come through.”

Spring is always a high-risk time for wildfires if there's little rainfall, as long as the previous year's grass is still on the ground.

“This grass is being replaced at the moment by new grass, and that won't be as easily set alight,” Dock explained. “Later, towards the summer, there might be a risk for forest fires instead.”

Currently, the biggest risk for wildfires is in the southern Götaland and Svealand region, as well as along the coast in Gävleborg, and SMHI has also issued warnings for dry fields.

READ ALSO: Six signs spring is on its way to Sweden

Although it has been officially springtime, based on Sweden's meteorological definition, in Götaland and Svealand for some weeks, most parts of Norrland are still experiencing winter. In that region, spring has only reached Gästrikland and parts of Hälsingland.

“The spring hasn't advanced much over the past seven days. It's been mild for some time now, but then it's going to get cooler again so I also don't think spring will advance much this week,” said Dock.

at the beginning of spring – på vårkanten