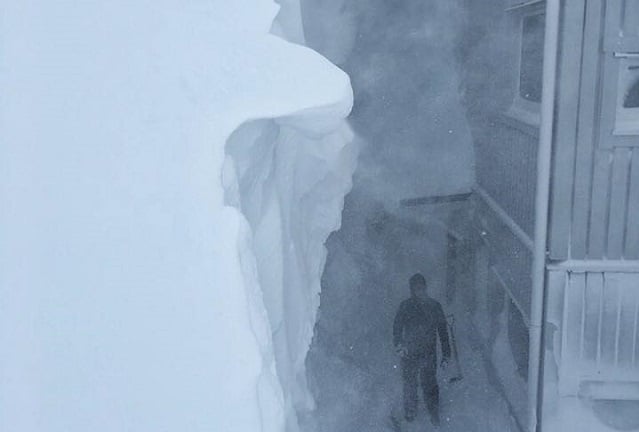 Four metres of snow has fallen at Sweden's most northerly resort. Photo: Riksgränsen

“It is more snow than average for sure, and we've had lots of snowfall combined with storms over the last couple of days adding to the massive buildup and snowdrifts,” Magnus Ormestad from the Riksgränsen ski resort, close to the northern border with Norway, told The Local in a message.

“As an example, the road passing us to Narvik was closed for at least two days due to an avalanche closing the road adding to the massive amounts of snow.

“But this is the Arctic so people here take it with ease.”

A post shared by Mountain Guide Travel (@mountainguidetravel) on Apr 1, 2019 at 9:22am PDT

A photo showing the extent of the snow shared on Facebook received thousands of reactions. Because it was published on April 1st, many people at first thought the image was an April Fool, especially since the southern parts of Sweden have been experiencing spring for over a month.

Other Swedish ski resorts have faced problems due to a lack of snow during the unusually mild winter, and last year Riksgränsen also had too little snow. But there was no such worry this year, where workers at the resort believe they are on the way to breaking a record for snow depth.

READ ALSO: This old Swedish law means you could be responsible for shovelling snow

“We could never dream that the photo would go viral to this extent. Newspapers, TV and radio stations from all over Europe all have contacted us,” Ormestad said.

However, he said that locals and tourists alike were appreciative of the deep snowfall.

“It is stunning up here at the moment: clear blue skies, with some clouds coming in. Just below zero and for the weekend it seems that there will be even more sunshine. The days up here are getting real long now as well – the sun will soon be up from 5am to almost 9pm so lots of time and energy to enjoy all this amazing snow.”