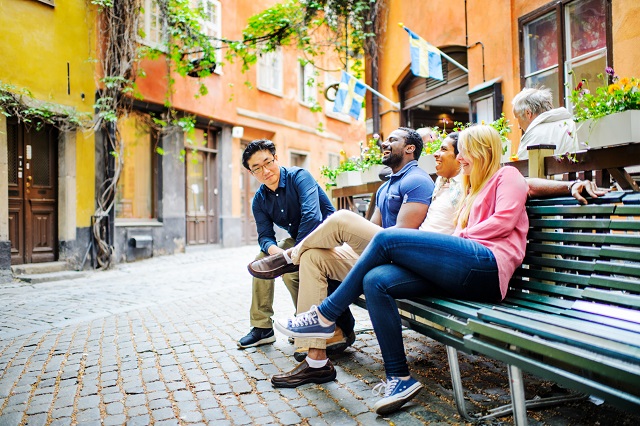 In autumn last year, I spent three months in Stockholm for an internship with The Local Sweden. This was my first time leaving my home country of Germany, and I realized that even though it’s a relatively small geographical distance, there are significant differences between the two countries.

I have now been back in Germany for about four months and even though I only spent a relatively short time in Stockholm, there are lots of things I already miss. Here are ten of the most important.

1. A lack of hierarchy

It might seem strange to start off this list by saying I miss something that isn’t even there, but here we are.

In Sweden, one of the first things I noticed was that there didn’t seem to be any hierarchies in the workplace. Employees just called their employers by their first names and basically talked to them like to any other colleague.

In Germany, you usually call your boss by their last name and address them in a very polite manner. It is up to them to decide whether they'll allow you to call them by their first names – and this might happen quickly or after years of working for them. But these more rigid systems might change soon, as it has become more common, especially in newer companies, to introduce flatter hierarchies, following the Swedish system.

When I was thinking about going out for goodbye drinks with my colleagues at the end of my internship, I remember my dad saying: “I don’t know if I would do that.” His reason was that if he was asked by his intern to go out for drinks, it would be unusual. And in Germany, it really can be. Even if you like your colleagues, it isn’t common to go out with them at the end of the day.

In Stockholm however, asking colleagues out for after-work drinks is so common that they've coined the word afterwork to refer to the tradition. There are even special offers for cheaper drinks during the after-work hours. If you are learning German or have ever tried learning German, you've probably faced the dilemma of whether to use formal or informal address when talking to someone new.

In Sweden, you call everyone du, regardless of your relationship, but it’s a bit more complicated in Germany. There, when you meet someone for the first time, it's common to call them Sie which means you're addressing them formally.

That applies to anyone – people you meet in the streets, teachers, bosses or cashiers. The only exception is among peers, such as classmates and colleagues, especif you're all relatively young. It is even regarded impolite if you address someone informally by calling them du – I recently accidentally called an older woman du and she disdainfully corrected me.

Now, Germany in general has quite a good picture of Sweden. This picture includes the nature, which is basically cherished in every way possible. And even though my perfect picture of Sweden needed some adjustment, I found that even in Stockholm, beautiful nature isn’t far away.

Even though Hanover, where I live now, is one of the greener cities of Germany, it just isn’t the same. From what I saw of even Stockholm's nature, it seemed more untamed and wild – in the forest on Djurgården, I even stumbled across a deer.

In Germany, basically everything is structured. Even if you are in a forest, you probably have a view over some agriculture. And the said forest usually also has a border, where it has to end. So the deeper connection to nature is something I really miss. Yes, work. You read that right. I am a student of journalism and went to Stockholm for a mandatory internship. After experiencing the field I later want to work in, it really feels odd to be back at university.

It felt good to actually practically use the skills I learned during my first semesters, and being back in the lecture hall feels a bit like a throwback.

The next point is a rather obvious one: cinnamon buns. In Stockholm, you can get them basically everywhere – from your local 7/11 to fancier bakeries. In Germany, that is not the case.

Even though Germany has quite an impressive culture of bread and baked goods (to be honest, German bread is really, really good), there are differences in individual products. Sweet goods are often filled, for example with custard, apples or plums, depending on the season. Spices aren’t used that broadly.

A cinnamon bun is the highlight of any day. Photo: Susanne Walström/imagebank.sweden.se

The Local is an international news publisher and the language at the office is English. So I didn’t really get the chance to practice my (very crude) Swedish at work. But nevertheless, I love the sound of the language.

German usually sounds harsh when you overhear it, but Swedish has a totally different ring to it – probably especially because I don’t understand it very well. If I walked by someone on the street who is in a heated argument with someone on the phone, I would probably still think positively about it. Meanwhile, German can sound aggressive, even if the things said are nice or innocent.

The tongue-twisting notion of Tschechisches Streichholzschächtelchen is a good example – it sounds like a disease, but just means 'tiny Czech matchbox'. Swedish and its softer, musical-sounding words are something I really miss.

When I came to Sweden, I was stunned by how high-tech everything seemed. Even though I lived in a village outside Stockholm, there was extensive mobile reception, as well as on the underground metro of Stockholm.

When I visited Sweden for the first time in 2013, I was shocked to find that the students of the school in Örebro I worked at had access to laptops, a school-wide WiFi network and overall much better equipment than what I was used to. Although digitization is a big thing in Germany, there are still loads of problems, the biggest one probably being finding a functioning internet connection in rural areas, or just on the go. Being able to connect basically everywhere is something that I really missed during these last three months. Yes, I miss the public transport in Stockholm. I lived slightly outside the city and was astonished by how easy it was to get into the centre – usually I could just jump on the commuter train and was back home in basically no time.

Even on weekday evenings, when I went to a concert for example, I could be sure that there would be a train going back to my station later at night.

Another method of travelling that I started to cherish more and more in Stockholm was travelling by ferry. The Waxholmsbolaget ferries are usually included in the public transport fees, meaning you can basically take any public ferry to travel around Stockholm’s islands – which provides you with a beautiful view as long as the weather is good. I remember spending whole weekend days just travelling around on the ferry, taking in as much of the city in as possible. For free!

Last but not least, the thing I miss most about Stockholm is Stockholm.

From the Old Town to Södermalm and the islands around it, like Djurgården or Skeppsholmen – every part of the city seemed different and had its own quirks, sights, and character to discover. The combination of things like the museums, the restaurants, the skyline views and being able to take the ferry as a method of public transportation made my experience of the city one that I will never forget.