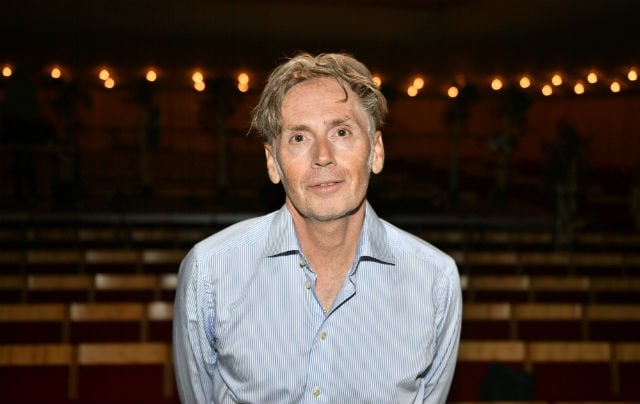 Stefan at a press-meeting for the broadcasters on Swedish Radio's 'Summer' program. Photo: TT
Ebba Stefansdotter Åkerlund was hit by the truck hi-jacked by the Uzbekistani terrorist Rakhmat Akilov shortly after stepping off a bus on Drottninggatan, Stockholm's main pedestrianised shopping street, on April 7, 2017.
“It has been a living hell over the past two years,” Stefan told Swedish state broadcaster SVT from his apartment in Stockholm's Norrmalm district. “But just now I'm starting to see the light.”
Stockholm last year said it would not to hold any further memorials to the 2017 attack, which left five dead and 14 injured, a decision which was criticised earlier this week by the parents of 31-year-old Belgian psychologist Maïlys Dereymaeker.
READ ALSO:
Stefan said part of the reason that he had struggled was that he had stopped working when Ebba started in the first class at the Campus Manilla school on Djurgården, meaning he had little social network to tap into after the tragedy.
“People who have a job to go to can get new contacts, but I'm not interested in going to work or getting any sort of hobby,” he said.
Last year on the evening of April 7, there was a memorial concert held for Ebba where top pop stars such as Albin Johnsén, Cotton Club, Lisa Ajax, and Nano performed.
Last summer Stefan broadcast an emotional personal essay about the tragedy as one of Swedish Radio's popular 'Summer on P1 programs,  talking about how he had struggled with depression, insomnia and loneliness in the year since his daughter's death.
But this week, he told reporters from SVT that he since read the story of the entrepreneur Pigge Werkelin, who lost his entire family in the 2004 tsunami, but then married again and had two daughters.
“For me the future means a new child, and I really hope to find someone in the inner city of Stockholm who also longing for one.”
Url copied to clipboard!