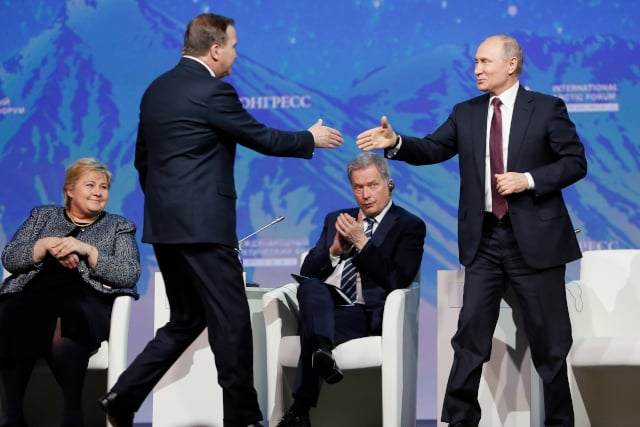 The meeting, which took place during the International Arctic Forum – a conference to discuss sustainable development, among other issues, in the area – was the first bilateral meeting between the Swedish and Russian heads since Löfven first took office more than four years ago.

Putin started a press conference before the meeting by noting that the countries had been through political disagreements, but said that he wanted to develop multilateral trade and investment.

There is no shortage of items on the list of quarrels between Sweden and Russia in recent years, including the Russian annexation of Crimea, Russian airplanes straying into or close to Swedish airspace, Sweden's security police alleging that Russian diplomats are carrying out covert intelligence operations in the country, and Sweden's famous hunt for a foreign submarine in the Stockholm archipelago in 2014.

After the meeting, Löfven said that he had addressed the conflict in the Ukraine and that Sweden would always criticize international law violations. “It was a good meeting with straight answers.”

He also said he had brought up human rights, climate change and the more aggressive behaviour by Russia in the Baltic area that several Swedish politicians and military officials had warned of:

“It is important to express that, just as it is when there are areas where we have similar views.”

Some of the areas where the countries could find common ground include the environment, foreign aid, trade and investment, and both Löfven and Putin said they wanted to look at ways of boosting the latter two.

There is no second meeting currently scheduled between the two leaders, said Löfven.

“But I would be happy to have one, because Russia is an important country for Sweden.”