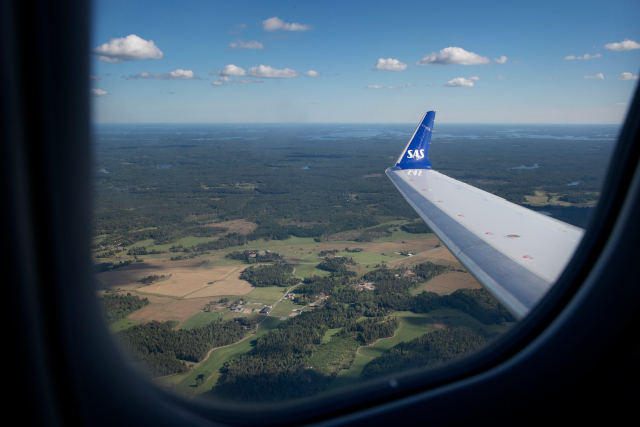 We asked readers how they feel about calls to give up flying. Photo: Jessica Gow/TT

Teen activist Greta Thunberg has campaigned for reducing air travel, travelling to demonstrations and talks across the continent via train and coach. And the Flygfritt 2019 (No-fly 2019) initiative started by two Swedes aims to persuade 100,000 people in the country to give up flights for a year.

The campaign has garnered international interest and recent statistics show that in 2018, Swedes made fewer overseas trips than the previous year for the first time since the global financial crash in 2008. Around a third said that concern for the climate had impacted their travel plans.

However, a weak krona and unexpected Scandinavian heatwave were also factors in more Swedes choosing staycations, and adult Swedes still took an average of more than one overseas leisure trip per person last year, suggesting they may continue to fly more than the global average for many years to come.

For many international residents in Sweden, flying less would mean more than just missing out on winter sun. Giving up air travel is a much harder choice to make when you live on the opposite side of the world to your family and friends, so The Local asked readers how they've reacted to the calls in Sweden to do just that.

Internationals in Sweden: how do you feel about #flygskam and the #flygfritt campaign, which challenges people to go a year with no air travel? Have you made any climate-related changes to how you plan travel? Let me know (for an article in @TheLocalSweden) pic.twitter.com/XQv28GrxXl

Paul Flynn said he had opted for a train holiday in Narvik, Norway, for the summer rather than fly. He said he hadn't been directly influenced by the Flygfritt campaign, but his reasons were climate-related.

“We have gradually understood that flying is no longer our entitlement and it poses a massive risk due to the environment because of the high CO2 output, we're endangering our existence and people need to wake up,” he said. Canadian Linda Vee said she had tentative plans to give up flying for several years once she had settled in her new country, but that this wasn't possible in her current situation.

“Being an expat living in Sweden, I'm feeling major climate guilt about flying to get home and to have relatives stay with us. We're enjoying local and European train travel here, but for now, we'll be flying or getting a visitor at least once per year,” she explained.

Several other readers said they were opting for train journeys where possible, but pointed out the limitations of international travel from Sweden.

“It's theoretically possible for me to get to my family in Britain if I take the train through Denmark to Calais and then the Channel Tunnel, but that will take a ridiculous amount of time. I dread to think of the cost too. Flying, I can be at my mum's in seven hours door to door,” explained Dave Munro.

“I'm taking SJ trains when possible (to Oslo, Copenhagen, and Sweden's internal journeys), and use plane to reach the continent,” said Gavin Marfaing, a student in Uppsala. “But if we have SJ trains going to Paris, Berlin… in the future, I'll use them!” Australian Talitha Engström said that the 'stop flying' campaigns had made her “feel bad” and encouraged her to consider train travel for within Europe, but noted there were no feasible options for getting to her home country without aeroplanes.

“As a Spanish [person] living in Sweden, with a daughter of seven years living in France and the rest of the family in Spain it is very hard (nearly impossible) to commit something like that,” said Carlos Bernuy-Lopez of the no-fly year challenge.

“I take flights when it is necessary and I try to moderate as much as I can the use of the private car. In Madrid (where I travel quite often), there are a lot of initiatives of car/motorbike sharing so I use them when I cannot reach with public transportation.”

And several of those who got in touch said that they travelled regularly for work, with reader Shelley Nichols saying she had six flights planned for work over the next three weeks.

Many international residents in Sweden work for global companies or have been hired specifically for their language skills and ability to work with clients across the world, so it would be unsurprising if this group carried out more business trips than average.

Jordan Leaphard said he travelled with his job in addition to an average of two overseas holidays per year. He said he considered car, boat or train travel where possible, but that the biggest criterion for him was cost.

Sweden made a commitment in its spring budget to invest 40 million kronor on investigating alternative methods of transport to flying, including overnight trains to the continent.

There are currently few ways to reach the rest of Europe without flying: ferries to Latvia, Lithuania, Estonia, Finland, and even Russia and Poland, or direct train routes to Norway, Denmark, and Berlin (in the summer only, and reservations are compulsory).

But even when it comes to domestic travel, there's a lot to be done to make rail a more attractive mode of transport. A train from Stockholm to Kiruna takes 15 hours, compared to a 90-minute flight, and while it's slightly quicker to get the train between Stockholm and Malmö or Gothenburg than to fly, if you factor in travel time to and from airports, the difference is small and train is only the cheaper mode of travel if booked well in advance.

READ ALSO: Two of the world's 'greatest places to stay' are in Sweden “We book train trips really early to the south of Sweden instead of flying to save money,” said Cathy Xiao Chen. “It's difficult if there's no other option that can match the convenience of flying.”

She also said she made an effort to choose climate-friendly options for shorter term travel, explaining: “We borrow a friend's EV car when we can and car pool.”

Swedish airports and airlines are doing their part to reduce the climate burden of flying.

Melissa Johnson, who works at a Swedish airport, pointed out that Swedavia has already taken steps to reduce emissions both from aeroplanes themselves and also from each machine used at airports. “So I honestly have no qualms with air travel involving Sweden especially, and it will not change how I plan any of my travels,” she said.

And others said they didn't feel uncomfortable with being frequent flyers because they took different steps to protect the environment and limit climate change.

“I recycle most things, I reuse as much as possible and I have made a huge effort to cut down on water and plastic but when I need to fly, I shall continue to do so as on many occasions there is no viable alternative,” said Jill Rosenlund.

Gabriela Malinowska agreed, and was one of several readers who said she had made other lifestyle adjustments in order to be more climate-conscious, but would not give up air travel. “We can contribute in different ways, so each of us needs to be aware of the situation and makes steps that realistically correspond to their daily routine,” she said.
“I need to fly for work, I need to fly to go back home, I need to fly to visit places that I want to see. The only way to move forward is by innovation and industry rules. And I want my taxes to be put on policies that make me pollute less by doing what I do,” said Eugenio Conti, who was one of several people in favour of 'green taxes'.
Rebecca Knutsson also called for initiatives from organizations, for example research into environmentally-friendly fuels and methods of cutting down emissions.

She added: “As an expat living in Sweden, the prospect of not being able to see my family more than once a year is not something I'm willing to do. I want to help save the planet but I also want to be able to see it.”