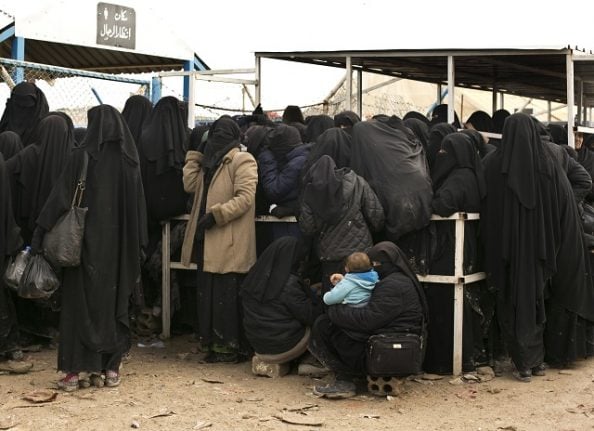 People including a mother and child wait for supplies at the refugee camp in Syria. Photo: AP Photo/Maya Alleruzzo

Around 80 children of Swedes who travelled overseas to fight for the terrorist group Isis are thought to be in a refugee camp in a Kurdish-controlled part of Syria. In total, around 800 foreign Isis fighters are being held by the Kurdish-led Syrian Democratic Forces (SDF), including some believed to be Swedish.

Foreign Minister Margot Wallström has said the Ministry is looking into the issue of whether the children can be brought home, and is “trying to obtain all the necessary documentation”, but has not yet made a statement about the ministry's stance or plans.

But Save the Children has argued that the United Nations Convention on the Rights of the Child means Sweden has a responsibility to collect the children.

“We believe that Sweden has both a legal responsibility and a humanitarian and moral obligation to act,” Ola Mattsson, head of Save the Children in Sweden, told the TT newswire.

“Such a situation, when it comes to Swedish children who are innocent of their parents' crimes, is very difficult. There are very difficult conditions. Many children are malnourished, have pneumonia or other illnesses, so it is an extremely dangerous place to be.”

Mattsson said that most of the children in question had relatives in Sweden who would be prepared to collect the children themselves, or pay for the trip, and that Sweden's main task would be providing the children with travel documents.

He also said that France had arranged for the return of some orphans, and Germany had recently taken German children home from Iraq. Some countries outside Europe, including Russia, Indonesia, Kazakhstan and Trinidad, have also reportedly repatriated the children of Isis fighters.

In Gothenburg, around 50 people demonstrated on Wednesday for the return of the seven children of a Swedish Isis fighter from that city, whose mother recently reported he had died in Syria.

It is estimated that around 300 people have left Sweden to join terror groups in Syria and Iraq since 2012. Roughly half of them are believed to have returned to Sweden, while around 50 are thought to have been killed and another 100 remain in the region.

READ ALSO: Swedish town votes to turn away returning Isis fighters (even though none ever left it)