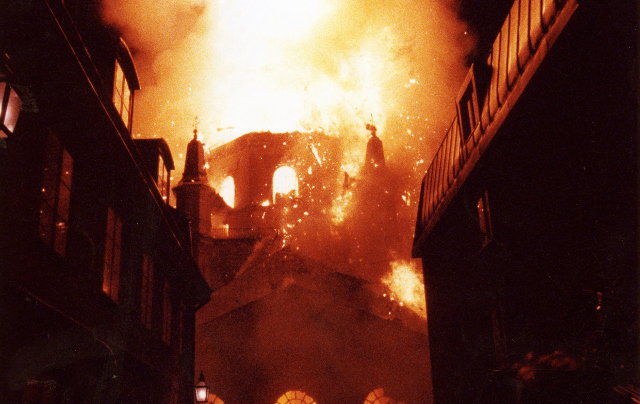 The inferno almost burned Katarina Church to the ground in 1990. Photo: Lars Pehrson/SvD/TT

The smoke could be seen from far and wide when Katarina Church was gutted on May 17th, 1990.

Built in 1695, the church had been strategically placed on the hills of Södermalm island, visible from the entire length of royal street Drottninggatan and from Lake Mälaren, where ships could use it for navigation.

It had grown to become one of the most important landmarks of the Swedish capital and its cemetery the resting place of some of Sweden's most famous people, including artists and political leaders. Katarina Church after the fire in 1990. Photo: Ingvar Karmhed/TT

It had already suffered one fire, in 1723, and was rebuilt, giving it its iconic octagonal tower.

That tower collapsed again in the second fire. Only the outer walls and items in the vault were saved, including a silver crucifix from the 15th century, a baptismal font and the odd piece of silver and textiles.

The blaze was believed to have started in the electricity wires connected to the great chandelier in the main hall of the church. There were no fire detectors in the church at the time, so when crews from a fire station located less than 100 metres away arrived at the scene, the building was already engulfed in flames. Katarina Church in flames on May 17th, 1990. Photo: Lars Pehrson/SvD/TT

Swedish architect legend Ove Hidemark, who had worked as the royal architect at both Stockholm Royal Palace and Drottningholm Palace, was tasked with restoring the church to its former glory.

Discussions about what to do with the ruins included a long line of proposals: including using modern materials to give the building a new purpose, or using traditional methods to restore the church in full. In the end, the latter line won, and thanks to careful drawings and photographs of the building, the architects were able to restore it to an almost identical version of its old self, with only very few exceptions.

A new organ was provided by J.L. van den Heuvel Orgelbouw in the Netherlands. The church was insured, but a foundation was also set up to help fund the restoration work, which was to end up costing 280 million kronor ($30 million at today's exchange rate). It received donations from 12,000 people.

It reopened in 1995 and today, it still looks out over Stockholm from the hills of Södermalm.