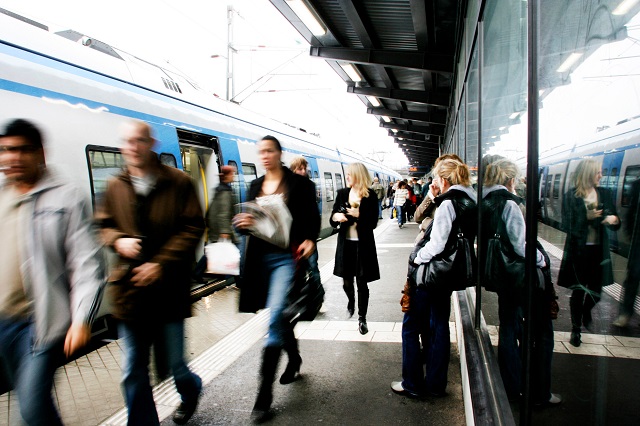 Bookings for train journeys across Sweden with railway company SJ have risen this year, with the railway company reporting a ten-percent rise in bookings compared to the same period last year.

If you were hoping for a spontaneous trip, the first thing to do is check if it's possible: many of the high-speed trains between Stockholm and Gothenburg or Copenhagen have sold out, as have some of the night trains to the far north. Maundy Thursday and Easter Monday are the most popular travel dates, so travelling on alternative days will likely give you more options.

Those with pre-booked travel plans should check if their journey is affected by the many planned track works taking place over Easter. These could mean passengers need to take a replacement bus or simply expect a longer than average journey time.

In Stockholm, the so-called Getingmidjan stretch of the tracks in the city centre will be closed for a bridge repair from April 18th to 5am on the 23rd. This means passengers on regional and long-distance trains going or arriving from southern destinations will need to change to the pendeltåg (commuter train) at either Flemingsberg or Stockholm Södra stations in order to reach Stockholm City. Remember that you'll need a valid SL travel card in order to travel on the pendeltåg.

Express trains to Malmö or Gothenburg will depart from Stockholm Södra (just a short walk from the Mariatorget or Medborgarplatsen underground tunnelbana stops, if this is more convenient than the pendeltåg), and trains to Karlstad or Oslo, as well as regional trains to Linköping, Katrineholm-Hallsberg, Nyköping, Norrköping, Eskilstuna-Örebro will depart from Flemingsberg. Elsewhere, trains between Bålsta and Stockholm on the Stockholm-Västerås-Örebro(-Gothenburg) route will be replaced by buses due to track works between April 18th and 22nd, increasing journey times.

In the Bergslagen region, bus replacements will cover the Ställdalen-Lindesberg stretch on the line passing from Gävle to Mjölby, resulting in longer travel time between April 19th and 22nd.

And buses will also replace trains between Örebro and Lindesberg along the route Gävle-Falun-Borlänge-Örebro-Hallsberg-Mjölby.

The Gothenburg-Malmö route will be replaced by bus because of track work between Kungsbacka and Varberg, also leading to longer travel times.

Bus replacements are also in place on the Mellerud-Öxnered stretch of the Karlstad-Gothenburg route during evenings for the whole of April.

Note that if you booked your entire trip with SJ, the extended travel times shouldn't affect your ability to reach your destination, since the company has factored these in when planning routes and connections. Updates from SJ on the Easter track works can be found here, and live traffic information here.

Track work is typically carried out over the bank holiday since fewer passengers are affected, and this year is no exception.

In Stockholm, the tunnelbana (underground) green line will be closed between Slussen and T-Centralen on Sunday and Monday, meaning passengers will have to change to the red line (which is being boosted with extra departures) for that section.

The pendeltåg commuter trains are expected to be busier than usual due to the aforementioned track closures for long-distance and regional trains, especially between Stockholm City and Stockholm Södra/Flemingsberg. In addition, there are bus replacements along several stretches of the pendeltåg (between Hemfosa and Nynäshamn, and Sundbyberg and Jakobsberg, until April 22nd) and Roslagsbanan lines. Find up-to-date information on Stockholm's public transport situation here.

READ ALSO: Five of the best day trips you can do from Stockholm In Gothenburg, there are seven major disruptions over the Easter weekend.

The Varberg-Borås train is not running between Varberg and Veddinge between the evening of April 18th and 22nd, with buses and taxis replacing the trains on this route.

The Öresundståg linking Gothenburg and Malmö will not run between Gothenburg Central and Kungsbacka from the evening of April 18th until the morning of the 22nd. Passengers are advised to take the Västtåg (Kungsbackapendeln) on this stretch instead, while buses will run between Hede and Falkenberg.

The Öresundståg will also not be running between Gothenburg Central and Mölndal on April 18th, so passengers are advised to take the Västtåg (Kungsbackapendeln) instead.

The Västtågen will not run on the Säffle-Mellerud stretch between Friday evening and Sunday evening, or on the Gothenburg-Ytterby stretch and Gothenburg-Gamlestaden stretchbetween Saturday and Sunday, and these routes have been replaced by bus traffic.

In central Sweden, Jönköpingsbanan will not be running between Jönköping and Nässjö from Friday evening until Monday morning, with buses replacing the cancelled trains. In Skåne, the main thing to be aware of is that trains from Lund-Malmö are cancelled from Thursday evening to Friday morning (there will be replacement buses) and will run at a reduced capacity until Sunday at 9pm. This may affect people travelling across the bridge to Copenhagen Airport in Denmark.

Find updates on the traffic situation in Skåne here.

And wherever you are, remember that public transport will be running to a holiday timetable throughout the long weekend, so look into the adjusted schedules. In general, it's a very good idea to build in extra time for any travel so you can avoid Easter stress.

If you're travelling by car, expect a longer journey time and busier roads than usual, and ensure you're well rested for the trip and keep to speed limits, since these factors can lead to an increased risk of accidents. The busiest days for travel are Maundy Thursday (April 18th) and Easter Monday (April 22nd).

Some of the areas where especially intensive traffic is expected are:

And a popular car fair in Jönköping is expected to lead to high levels of traffic in the surrounding area and the E4 leading to it. One of the busiest stretches, where there are also a high number of accidents, is the E4 between Gävle and Tönnebro. Overtaking will be banned in the northern direction on Maundy Thursday and in the southern direction on Easter Monday, as a safety measure.

“Unfortunately, we can clearly see that Easter is a weekend with a high number of traffic accidents. Last year, eight people died and over 200 people were injured,” Joanna Ljunggren, a press officer at the Swedish Transport Administration, told the TT newswire.

According to Ljunggren, around half of motorists typically drive faster than the permitted speed limit, and she said that sticking to the limits can save lives. Drivers are also advised to take breaks, ensure they have water and food in the car as well as a fully charged mobile phone, but not to check their phone will on the road.

And despite a wave of warm weather leading up to the Easter weekend, drivers shouldn't necessarily assume road conditions will be excellent. Nighttime temperatures are still low, and continuing to dip into the minuses in parts of Norrland and even inland parts of Götaland and Svealand, although the dry air reduces the risk of frost on the roads. You can find up-to-date information about roadworks and events affecting the traffic situation here.