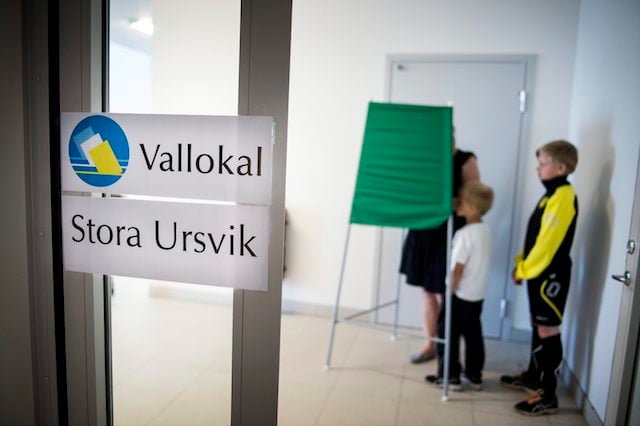 The parties that are running are almost the same as those that ran in Sweden's September 2018 parliamentary elections, but each vote technically goes to a party's “European Parliament” parent organization. For example, a vote for the Social Democrats or for the Feminist Initiative would go to the same parent organization of the Progressive Alliance of Socialists and Democrats.

In the European Parliament elections, like Sweden's national elections, voters can choose to vote for a specific candidate or for a party; in the latter case, the party's own lists determine which candidates enter parliament. A party needs to get at least four percent of the vote to gain representation in the EU Parliament.

After the 2014 European Parliament election, nine parties had won at least one spot in the policymaking body. All nine parties have proposed candidates in the upcoming election and have released platforms addressing major issues.

READ ALSO: How to vote in the EU elections in Sweden

Characterized as one of the more EU-friendly parties, the Social Democrats have called for the European Parliament to expand its responsibilities and take on more reforms in a variety of policy areas.

The Social Democrats believe that the EU should secure fundamental human rights, while also making sure that work is properly compensated through a decent salary.

On the issue of the climate, the Social Democrats have called for the EU to set more ambitious goals, developing the international train network to make it easier and cheaper to travel across Europe while cracking down on aviation-related emissions.

The party also calls for each EU Member State to receive refugees.

Addressing the rise of right-wing populism in both Sweden and Europe, the Social Democrats are hoping to stand up against extremism, “regardless of whether it is right-wing extremism or religious fundamentalism” according to their manifesto. Crime and safety are key issues for the Moderate Party.

Among their proposed reforms are tougher external borders and stronger cross-border police cooperation to combat criminal networks, which the Moderates believe are responsible for the smuggling of guns and weapons into Sweden.

Regarding climate policy, the Moderate Party proposes that the EU invests more in nuclear research through the Eurotom program, which coordinates nuclear power research throughout the European Union. “Our Climate Policies are Needed in Europe” and “Our Fight Against Right-Wing Populism is Needed in Europe” are slogans featured on Centre Party posters for the EU election. In these graphics featuring party leader Annie Lööf and top candidate Frederick Federley, the green-liberal Centre Party makes its top issues clear: addressing climate change and populism.

The Centre Party wants the European Union to reduce its carbon dioxide emissions by 55 percent, rather than the previous established goal of 40 percent, before 2030. To do this, the Centre Party advocates for raising the cost of emissions and tightening the emissions trading system.

The party calls for countries that neglect fundamental human rights and freedoms to be prohibited from receiving EU funding. Centre Party Press Secretary Michael Arthursson stands in front of one of the many party posters released for the EU Parliament election. Photo: Janerik Henriksson/TT

Running under a slogan apparently inspired by US President Donald Trump, “Make EU Lagom Again”, the Christian Democrats advocate that the EU limit its involvement in issues such as welfare, family politics, and forestry, so that these can be handled by individual governments.

“The overall budget principles that guide the collaboration must be that every krona spent at EU level should create a greater value than if the krona is spent through national budgets,” write the Christian Democrats in their manual. The Liberals are one of the only Swedish parties advocating that the country move to the euro, a change they argue would benefit Swedish companies.

The party also calls for a functioning welfare system in all of the EU's countries, as well as a common border police and FBI.

Regarding climate issues, the Liberals want train travel throughout Europe to be made easier and for a common carbon dioxide tax. Having previously pushed for a Swexit, or Sweden's exit from the European Union, the Left Party is now focusing on changing the European Parliament internally.

In terms of immigration, the Left Party calls for open borders and the creation of a coalition of member countries that wish to develop a common refugee policy.

The party also wants to pursue a feminist trade policy and to limit the impact and presence of lobbyists in the European Union. The party believes that the EU should not be militarized.

Like the Left Party, the Sweden Democrats also once pushed for a Swexit, but are now looking to decrease the body's powers internally.

One way of doing this would be by limiting EU involvement in issues such as forestry and hunting, so these can be determined by individual countries.

Their platform includes tougher outer borders and that member states should have the right to introduce their own border controls.

The Sweden Democrats also advocate that the EU work to counteract the spread of Islamism.

“The EU should also through their diplomatic commitments actively problematize and counteract Islamism, as well limit and regulate migration,” the platform states.

The only party with a seat in the EU Parliament but not in the Swedish parliament, Feminist Initiative hopes to send its representative, Soraya Post, back to Strasbourg.

The party wants gender issues to be prioritized in the European Parliament and advocates for the establishment of an EU commissioner for gender equality and anti-discrimination. It also wants each child in the EU to have access to preschool and childcare.

The Feminist Initiative also advocates a pacifist defence policy. It wants arms exports to be abolished and for the European Parliament to do away with plans for a common army and defence alliance.

As the party name suggests, the Green Party's platform places a particular emphasis on environmental policy, as well as migration and democracy related issues.

The party advocates that environmental demands and “fair working conditions” be included in all trade policies. In addition, the party also wants to invest in sustainable fishing and reliable railways throughout Europe.

Green Party candidate and former government minister Alice Bah Kunke recently topped the list of candidates whom the voters have the most confidence in, followed by the Moderate Party's Tomas Tobé and the Centre Party's Frederick Federley.