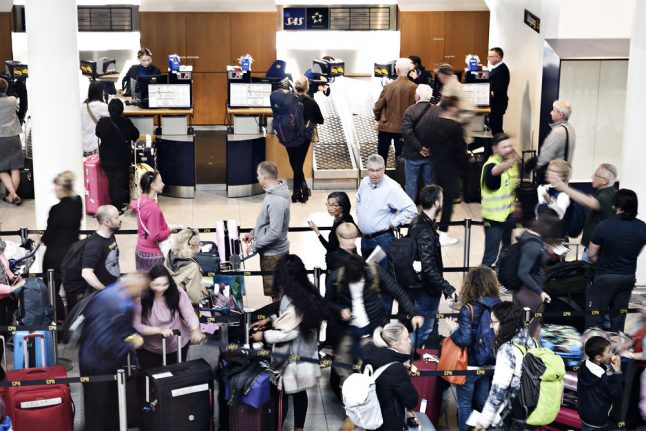 SAS passengers at Copenhagen Airport on Friday. Photo: Philip Davali/Scanpix
According to EU law, passengers affected by major flight delays or cancellations are entitled to monetary compensation. Long delays can result in compensation of up to €600, but passengers' entitlement to these benefits depends on whether the delay or cancellation is the fault of the airline.
The delay or cancellation must be due to “extraordinary circumstances”, defined as events that couldn't have been avoided even if the airline took all reasonable measures.
A SAS spokesman told a Norwegian aviation website that the airline views the pilot strike as out of its control and will therefore reject all compensation claims.
“Passengers are not entitled to compensation when the delay is caused by a strike, as that is considered an extraordinary circumstance that is outside the airline’s actual control,” SAS information manager Morten Johansen told flysmart24.no.
The airline’s stance is almost certain to be challenged, however. The Danish companies Flyforsinkelse and Flyhjælp, which both focus on the rights of airline passengers, have said that SAS customers affected by the strike are entitled to compensation. Both companies pointed to an April 2018 decision by the EU Court of Justice that ruled that a strike by flight staff “does not constitute an ‘extraordinary circumstance’ releasing the airline from its obligation to pay compensation.” In that decision, the court said future compensation claims spurred by airline strikes would be accessed on a case-by-case basis.
READ ALSO:
The strike by SAS pilots across Scandinavia began on Friday, and tens of thousands of passengers have been affected by cancelled flights over the weekend. A total of 670 flight cancellations were announced on Friday and an additional 587 Sunday flights were scrapped on Saturday. Around 100,000 passengers have been affected.
Roughly 70 percent of all SAS flights are affected during the strike, meaning most domestic flights have been cancelled, as well as many European and long-haul flights. More than 1,400 pilots walked out on Friday, according to the SAS Pilot Group, including 372 in Denmark, 545 in Norway and 492 in Sweden.
The strike comes after unsuccessful negotiations on a collective bargaining agreement between the pilot group and the airline. The disagreements are related to salary increases, working hours and scheduling.
Passengers affected by the strike have complained that “it feels like we have been abandoned”, with several stranded passengers telling The Local that the airline has been of little help.
SAS’s communications director in Denmark, Mariam Skovfoged, told Danish news agency Ritzau that the company is willing to find a solution that will get pilots back on board.
“We would really like to have a good and responsibile agreement with our pilot associations – precisely like those we have with our other personnel groups within SAS,” she said.
René Arpe, the head of the Danish Pilot Association and chairman of the SAS Pilot Group, said that the striking pilots are willing to continue negotiations but said that any progress “requires SAS to change its attitude toward our demands and begin participating in real negotiations.”
“We are very, very confident that the demands we have are not at all irresponsible, as has been said. These are quite reasonable requirements,” he told Ritzau.
Scandinavian media have reported that the pilots' requests included a 13 percent salary increase as well as more advance notice of their work shifts so that they can better plan their personal lives around work requirements.