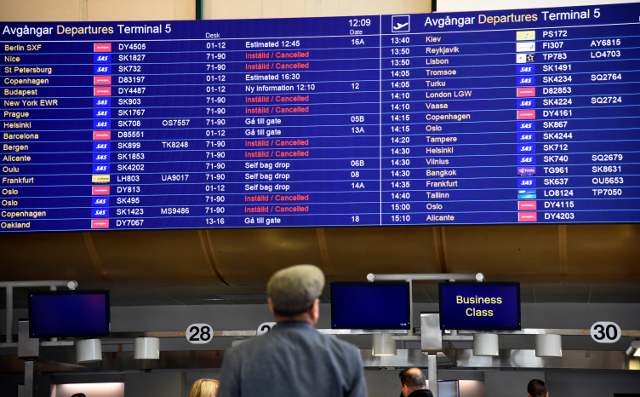 “We have to put an end to this strike,” SAS CEO Richard Gustafson told Swedish news agency TT as hundreds of flights remained grounded on the fourth day of industrial action.

More than 279,000 passengers have been affected by the Scandinavia-wide strike, since 1,409 of the airline's pilots walked out on Friday in a dispute over salaries, working hours and scheduling.

Negotiations have yet to resume after breaking down last week, and there has been little indication that either the employer or the trade union is prepared to budge, despite both urging the other side to compromise.

“We both have to take responsibility now and come back to concrete discussions to find solutions that also offer a future for this company, even after this conflict,” said Gustafson.

He said SAS had tried to be “creative” in resolving the conflict with the pilots.

“We have made attractive offers that they have turned down. We'll have to see what else we can do.”

Swedish, Danish and Norwegian pilots are asking for a raise of 13 percent according to the employer, who is offering 2.3 percent, but the union says that working hours and scheduling rather than salary are key issues.

“The way forward is that SAS shows a genuine will to sit down and negotiate. If they do that, I am convinced that we can resolve this. I think SAS has to take responsibility,” said Rawaz Nermany, chairman of the Swedish Pilots' Association.

But not even mediators could see a light at the end of the tunnel on Monday.

“The parties remain fixed in their positions. It makes no sense to meet and repeat the same things all over again. We are on standby to get to work again whenever, but things have to change from what they were when talks broke down,” mediator Jan Sjölin told TT.

More than 1,200 departures were cancelled on Monday and Tuesday, affecting almost 110,000 travellers.

Customers who have booked flights scheduled to depart before and including May 5th are being offered the chance to cancel or rebook their ticket for free.

SAS CEO Gustafson expressed concern about the number of customers affected, as well as the company's ability to weather the conflict with its competitiveness and finances intact.

“This is costing way too much money and hurts the customers' trust in us. But we'll have to wait and face the financial costs after ending this conflict,” he said.