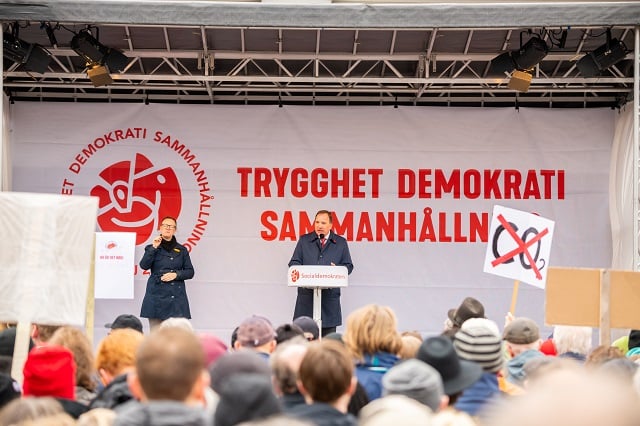 “It is shameful that the dregs of history rears its ugly head even on this day,” said Löfven in the northern city of Umeå, referring to the marches by the neo-Nazi group NMR (Nordic Resistance Movement) on Labour Day, May 1st.

“Nazism should be buried in the graveyard of history,” the prime minister added.

After previous NMR demonstrations, the government ordered an investigation into the possibility of banning certain symbols, flags, and other items linked to Nazi groups. But Löfven said he wants to go a step further and ban Nazi organizations altogether, something which he hoped would be made possible by another government inquiry.

“A democratic society must defend itself. We cannot just look on when undemocratic forces use democracy to destroy democracy,” he said.

He said that he believed such a ban was not incompatible with the Swedish constitution, which guarantees freedom of speech, and that he wanted to introduce the ban on Nazi groups “during this term of office”.

On Wednesday, hundreds of counter-demonstrators gathered to disrupt an NMR rally in Kungälv, north of Gothenburg. A total of 18 protesters were arrested for throwing bangers at the marchers, while others protested peacefully by singing loudly and making other noises.