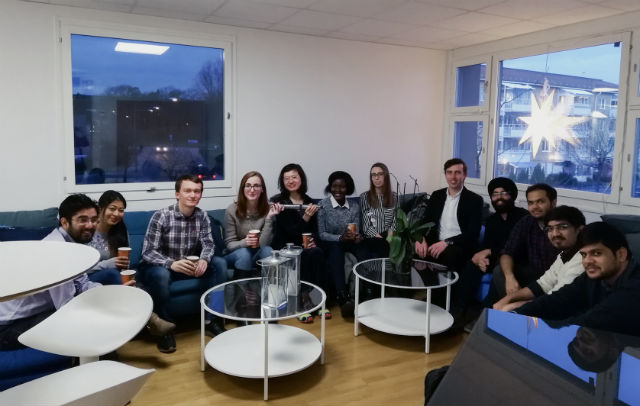 Photo: NFGL Linnaeus University and KTH Local Networks at a study visit
On September 26th, the current board members of NFGL Linnaeus University gathered together to discuss activities which we planned to organise. We were full of positive enthusiasm and inspiration, and it would not be an exaggeration to say that our network had dozens of ideas. During the discussion, I came up with the idea to include a study visit to a company.
However, it is always easy to talk about things but much harder to keep the same motivation when it comes to planning it. The winter holidays were coming up, and companies were busy, but I kept reaching out with the hope that I would receive a positive response. And it finally happened.
SaltX Technology, a company which found a truly unique solution to store energy using nano coated salt, was ready to show us what they are doing, and even provided an exciting workshop for us students. Photo: NFGL Linnaeus University and KTH Local Networks on a study visit at SaltX Technology
Generally, while I was writing to different companies, I was really surprised: even if organisations could not welcome us for a reason or another, they always took time to respond to us kindly. Several companies also suggested keeping in touch so we can arrange the study visit at a later date.
As mentioned above, even though my first attempts were not successful, I kept going because I received responses and realised that my emails were not ignored.
One more obstacle appeared though: only two of us from the NFGL Linnaeus network could participate, and for sure it was not a sufficient amount of people.
I made an announcement on our Facebook group regarding this issue, and it figured out that KTH university also planned to organise a study visit to this company.  So Anup Raj Dhungana from the KTH Local Network and I gathered enough people, and on December 10th, the study visit to SaltX Technology finally took place.
We were taught the working principle of technologies developed by the company, and there was a lab guide where NFGL members were shown current and future potential projects. During the workshop, we were involved in a teamwork exercise to try and to generate creative ideas which could be useful for SaltX Technology equipment.
My one tip for planning study visits is never to give up. If you wrote to a large number of companies, but none of them could help, it should not be a dealbreaker so keep it up!
I believe that this advice is applicable not only for the organisation of activities; whatever you have on your mind which you are passionate about, you should not give up to be able to translate it into reality.