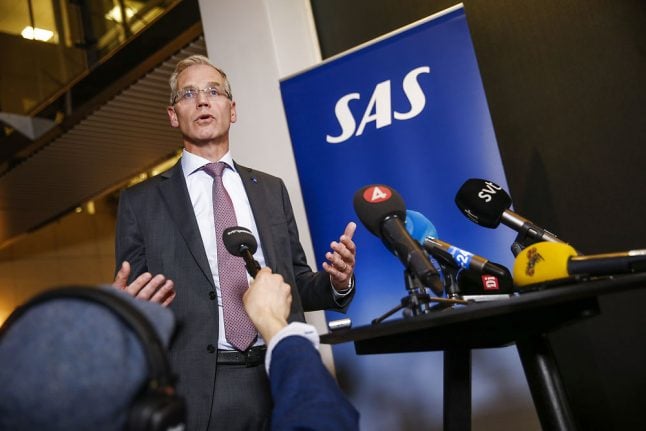 SAS CEO Rickard Gustafson announced an end to the pilot strike Thursday night in Stockholm. Photo: Fredrik Persson/TT/Scanpix
SAS announced late on Thursday night that it had reached a deal with the pilots' union to end the strike that has seen more than 4,000 flights cancelled over the past seven days, stranding over 380,000 passengers.
READ ALSO: SAS reaches deal with pilots' union to end week-long strike
Although SAS CEO Rickard Gustafson said at a press conference that “we can now put this conflict behind us”, a number of Friday flights were still cancelled at the airport’s primary Scandinavian airports.
In Stockholm, early Friday morning flights to Oslo and Split, Croatia were the only European SAS departures to be called off but all of the airline’s scheduled flights to the United States were axed. This included scrapped departures to Los Angeles, Chicago and Newark.
The situation was similar in Copenhagen, where SAS flights within Europe were running as normal with the exception of the early scheduled departure to Oslo. SAS departures to the US cities of Boston, Chicago, Newark Washington DC and San Francisco were cancelled, as were long-haul flights to Shanghai, Beijing and Tokyo.
Things were worse for Norwegian passengers, as Oslo’s Gardermoen airport had a total of 19 SAS flights cancelled on Friday. This included early scheduled flights to Copenhagen and Stockholm as well as domestic departures to Trondheim, Bergen, Kristiansand, Bodø and Tromsø. A scheduled flight to Newark was also called off. With the exception of early flights to Amsterdam and Nice and one afternoon flight to Paris, SAS’s European flights from Oslo were set to leave as planned.
The strike that ended late on Thursday involved over 1,400 pilots in Denmark, Norway and Sweden. They walked off the job last Friday after the main pilots' union failed to reach a collective bargaining agreement with the company.
One of the major sticking points was the issue of scheduling, with pilots saying that unpredictable working hours sometimes left them working seven weekends in a row. SAS said that pilots had also requested a 13 percent salary raise, significantly more than the 2.3 percent offered by the airline.
The final agreement reportedly guaranteed them a 3.5 percent increase for 2019, along with improved job security and more predictable work schedules.