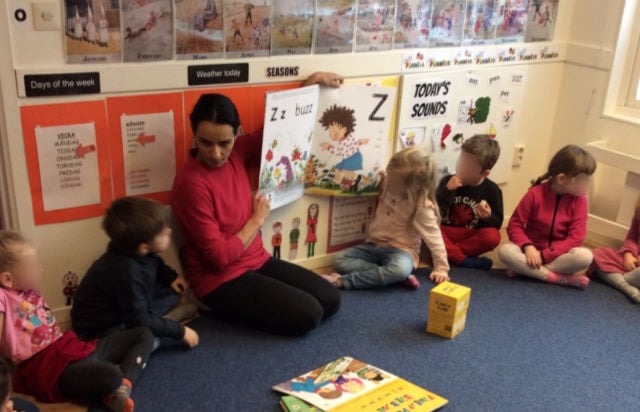 The principal of three of Futuraskolan’s preschools, in Näsby Park, Skarpäng and Danderyd, Adriana Marx-Norén, discovered the British technique of Jolly Phonics when she was looking for a way of teaching literacy that would work across languages.

The group of schools faced a unique challenge: all teaching is done in English and Swedish, but, with the school welcoming pupils from all over the world, a number of the children speak neither language. The school’s ethos around creating ‘global citizens’ needed an appropriately international approach.

“I used to be a principal in the mainstream Swedish system, and when I started at Futuraskolan, I saw immediately that there was massive diversity here,” explains Marx-Norén. “In just one of our schools we have 52 different nationalities. Among our teachers we’re able to support children in 23 different languages. It made me stop and say to myself, ‘We can harness this richness of culture.’” Jolly Phonics proved the answer; a multi-sensory method of teaching English through a mixture of sounds, actions and visual references for each of the 42 letter sounds. With interactivity – whether through songs, images, or movements representing different letters and noises, it’s centered around making children an active part of the learning process.

How does teaching through phonetics work?

The process is simple: a number of new sounds are introduced each week, along with words relating to the sounds (for example, the sound ‘a’ might be accompanied by the image of an ant and moving your finger up your arm to signal an ant running up it). Then images of ants will be placed around the room to enforce the sounds connected to pictures.

The next step is to ‘blend’ multiple sounds, as well as images and actions, enabling children to naturally start reading and then writing. READ ALSO: This international school in Stockholm is tailoring education to the teenage brain

The international school has seen success by focusing on one simple thing when teaching English: phonetics. With phonetics applicable across languages, children can apply what they learn in school to Swedish, English – or any other language using the same sounds.

“Sounds are universal,” says Marx-Norén. “So, these children become like musicians learning notes. They memorise the sounds by practicing in songs and stories, then they can go anywhere and be able to make sense of words.”

And it’s a tried-and-tested approach with proven results. According to Janine Tuomisto, a teacher at Futuraskolan Skarpäng, where the method was introduced in October 2018, 98 per cent of the preschool’s pupils are Swedish with no use of English at home. Just months later, 80 percent of the group are reading and writing words independently.

Asma Bilal, a teacher at Futuraskolan Näsby Park adds,“Our children learn that different sounds together make different words, regardless of whether we’re looking at Swedish or English. It’s the perfect solution for international children.” Never too early to start learning

And thanks to this focus on sights, sounds and movements, Futuraskolan has been able to teach English to children of any age. The preschools across greater Stockholm have been experimenting with tailoring the teaching to varying ages and abilities – even among children as young as one.

Marx- Norén tells The Local: “Initially in 2014, we started with our oldest children – that’s four and five-year-olds. And it was a success. We used all of the sounds and actions, then some music, and, suddenly, they were reading. We’d see them teaching songs to the younger kids – and those children began picking it up, too.”

Seeing their pupils responding instinctively to this way of learning inspired the teachers to introduce an adapted version of the method to their youngest cohort from just one-year-old. Starting by linking sounds to images, the children become exposed to different noises and how they can use them to communicate through language.

The result? When children leave Futuraskolan’s preschools, they’re reading and writing. It’s an outcome that Tuomisto deems “amazing”: “It puts them way ahead of their peers, who usually enter the school system still learning to link sounds and how they look on paper.”

Find out more about Futuraskolan International's schools in Stockholm It’s not just students who are responding well to Futuraskolan’s new approach; parents of the school’s pupils have been waxing lyrical about their children’s growing enthusiasm towards learning English, too.

“Just last week one parent came to us and told us that they were out in a restaurant and their child was able to read ‘pancakes’ in English out loud, by spelling each of the individual sounds he saw on the menu,” Bilal recounts. “Both of his parents are Swedish by birth, with just Swedish spoken at home, so it was incredible for them to hear their child speaking English spontaneously.”

Setting children up for the future

As the network of schools’ name would suggest, it places an emphasis on setting children up to succeed in the future. The latest technologies are installed across the preschools’ themed classrooms, to be used when teaching English – and all other subjects on the curriculum.

There is an impressive range on offer – from robots which can be programmed by the children to respond to commands, to materials allowing pupils to create their very own scannable QR codes, which – among other purposes – can play the sounds linked to each of the new letters they’re learning.

“Gone are the days when we had to be passive and quiet to learn – all of the technology on offer at Futuraskolan is about allowing the children to have a hands-on experience.” Bilal notes. “It’s about giving them the tools they’ll need to succeed in tomorrow’s world, not being tied to the ways in which schools used to teach in the past.” With so much interactivity woven through Futuraskolan’s approach to teaching, their schools are a far cry from the ‘sit and listen’ circle time of classrooms past.

Whether they’re learning songs, playing instruments or embarking upon hunts across classrooms to find images relating to each new phonic, Futuraskolan’s pupils are encouraged to see learning as fun from a young age.

And, with the children enthusiastic about learning, it becomes a virtuous cycle. “Our parents tell us about their children reading their siblings bedtime stories, passing on what they learn at preschool,” says Bilal. “They’re engaged in learning and, because of that, they’re learning English more quickly than we could ever have hoped. It’s become a standout feature of how we teach.”

This article was produced by The Local Creative Studio and sponsored by Futuraskolan International School of Stockholm.