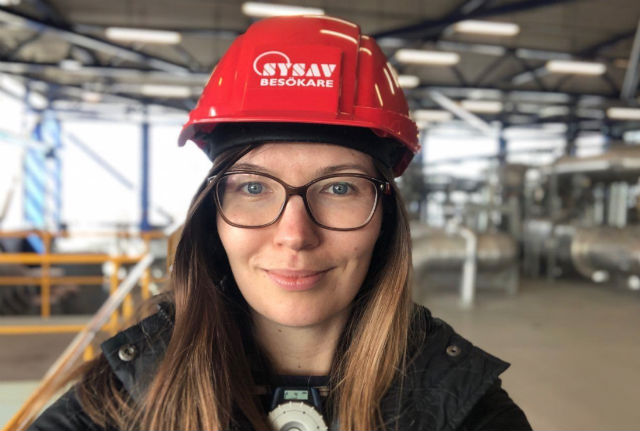 Some time ago I was lucky enough to be able to join a trip to Sysav, one of Sweden’s most efficient waste-to-energy plants. The tour was organized by members of the Lund Chapter Network for Future Global Leaders.

I was particularly interested in that tour, given that I come from Russia, a country that, despite being the most significant territory in the world, is now facing an escalating landfill crisis in its European part.

Being deeply involved in the Russian waste management issues for years (I was a co-founder of a battery recycling company), I was super excited to get some answers from Sysav, Sweden’s’ most efficient waste-to-energy plant in Malmö, owned by the 14 local municipalities.

Green lawn, bike lane, light plant building with a big logo ‘Sysav’. Apart from that, a typical suburban industrial environment surrounds me as I walk from the final bus stop to the facility. Rustan Nilsson, Sysav’s Environmental Educator, meets us at the entrance and walks us to the conference room for a  lecture before we see the actual plant. Photo: Sysav, one of Sweden’s most efficient waste-to-energy plant

“Waste is a symptom, not the actual problem,” Rustan starts. While showing us the statistics about the dramatic decrease in the country’s landfilling rates – from 60 percent in 1980 to less than 5 percent in 2018.

He points out that it’s the absolute figures that matter, not the relative ones. The absolute ones are disturbing: even in Sweden with its efficient waste system and citizens’ sustainability awareness, there is more and more waste every year. Today it’s 500 kg of garbage per person per year, 19 times more than 80 years ago.

And this number doesn’t even include the ‘outsourced’ industrial waste, created in the earlier stages of product life cycles: raw material extraction, refining, production, assembling and transporting. “We, in Sweden, were too obsessed with the floor mopping techniques and we overlooked the leaking tap,” concludes Rustan. As we go to see the plant, it’s the waste bunker that grabs our attention. A massive space the size of a football stadium, full of trash. I thought: is this what we collectively produce as a civilization? 65 percent of all those hundreds of tons of waste can be recycled, yet end up in a furnace, because of us being too lazy to sort it properly.

All those iPhone fake leather covers, toothpaste tubes, cheap summer sandals are wasted. These products are designed for this massive pile of trash. We even had a chance to look into the furnace, the 1000°C hell for our unwanted things.

Of course, I asked about the emissions treatment. Sysav complies with Sweden’s strict air quality standards, the air test documents are publicly available, and the building itself has two glass walls, indicating the maximum transparency of the plant’s operations. On my way back, I thought about the dead-end we all collectively created in Europe. Incineration kept us feeling good about the low landfill rates and hid the uncomfortable truth: there is no way we can maintain the status quo and keep up with this pattern of production and consumption.