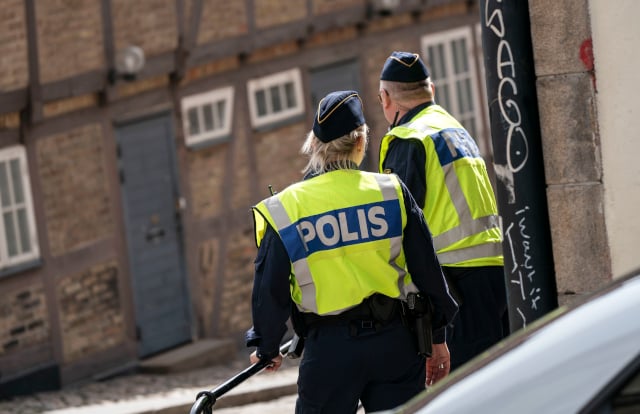 Police stationed officers outside the Jewish centre in Helsingborg, but no longer suspect the attack was a hate crime. Photo: Johan Nilsson/TT

The woman, who is around 60 years old, was attacked on the street on Tuesday morning and taken to hospital with life-threatening injuries. On Wednesday her condition was described as serious but stable.

Police stepped up security at the Jewish centre in Helsingborg due to the woman's role as an active member of the city's Jewish congregation, and investigated possible anti-Semitic motives.

The suspect fled the scene after the attack, but after police had tracked him down and it emerged he was previously known to Swedish authorities, officers said nothing indicated it was a hate crime.

“We're not talking about a hate crime at the moment, just about attempted murder,” local police chief Sven Holgersson told Swedish broadcaster SVT, which reported it appears the suspect lacked a real motive for the attack. The man and the woman did not previously know each other.

“Based on the way things are looking right now, it's an isolated incident,” said Holgersson.

The man, who is aged around 30, was seized by Danish police at around 3am on Wednesday and was expected to be brought to Sweden for questioning.

Filip Annas, a spokesperson for the Malmö police, said that the operation had been launched after a member of the public reported seeing a person with a “weapon-like object” at the entrance of the mall.

By 3pm, police stated that they had searched the entire shopping mall, had not found anything suspicious and no longer deemed there to be a threat.

On August 20th a 31-year-old man was shot dead in broad daylight in the shopping centre, while a woman who happened to be standing near to him suffered a bullet wound.