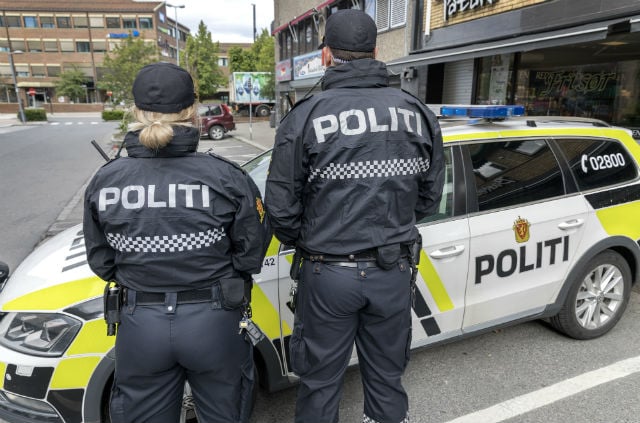 Could these Norwegian police officers soon be fighting crime in Sweden. Photo: Gorm Kallestad / NTB scanpix / TT
“When it comes to police shortages, we should leave no stone unturned which might help increase staff numbers, and this might be one of the pieces of the puzzle,” Lena Nitz, chairperson of the Swedish Police Union, told the TT newswire.
“In Norway they have more police than they plan to employ. They are newly educated, extremely motivated and in search of police work.”
According to the union, more than 250 trained police officers are currently unable to find a job in Norway, despite completing three years of training and passing a professional exam.
The union wants the government to put some of these officers through a short conversion course and then employ them in Sweden.
READ ALSO:
Young Swedes have long flocked to Norway to work in shops and cafes in the major cities of Oslo and Bergen, where the salaries are much higher. Norway has also long recruited nurses and doctors from its Nordic neighbour.
But up until now, the traffic has been largely one way.
If the plan goes ahead, it wouldn't be the first time that two European countries have cooperated on criminal justice. In 2015, Norway started sending criminals to serve their sentences at a prison in The Netherlands because its own jails were too full.
Nitz said she believed that without innovative measures, it would be difficult for the Swedish police to meet its target of putting 7,000 more officers on the beat by 2024.
“This is a challenge when we are not filing all the places in police education and aren't managing to hold on to the police officers we already have today,” she said. “It's going to take a long time before we have the police corps we need to carry out our duties.”