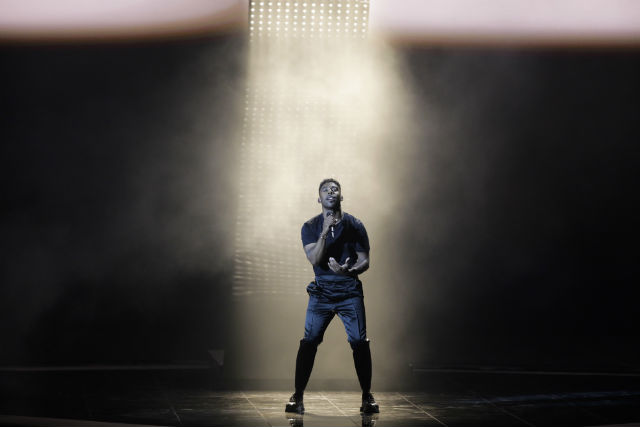 John Lundvik sings bathed in a tower of light. Photo: Sebastian Scheiner/AP
The British-born singer-songwriter, who penned the song together with the Malmö-based Anderz Wrethov, was upbeat after the performance, telling the Expressen newspaper he felt “pure, unadulterated joy and happiness”
“I have never been so nervous as when I was waiting for the result in the green room. The only thing going around in my head was “say it, say it then… it was such an unbelievable relief when they shouted out 'Sweden!'.”
Lundvik's confident performance followed a week in Tel Aviv marred by bad luck, with a dreadful rehearsal on Friday which saw Lundvik enveloped in a cloud of smoke.
During Wednesday's rehearsal, a technical fault with the lighting rig saw the singer plunged into darkness almost as soon as he began singing, leaving his performance visibly affected.
After his faultless semi-final, Lundvik clenched his fists in a victory gesture, after which his four backing singers, The Mamas, ran up to embrace him.
He then threw a shout out to the audience: “We love you! It's never too late for love! Never forget it!”.
Sweden is now through to Saturday's final alongside its Nordic neighbours Denmark, Norway and Iceland.
Of the Nordic nations, only Sweden and Iceland's Hatari are seen as among the favourites, with Hatari causing controversy by describing the competition's Israeli hosts as “apartheid”.
Denmark's Leonora, with Love is Forever, and Norway's KEiinO, with Spirit In The Sky, are dark horses at best. Finland's Darude & Sebastian were voted out on Tuesday night.
The official Eurovision Twitter account gave Lundvik its backing.

?? No @JohnLundvik, it isn't Too Late For Love because we love you!#DareToDream #Eurovision #SWE pic.twitter.com/egFJc4RRpl

That was PURE JOY! #TooLateForLove with John Lundvik & The Mamas is such a instant mood lifter! We “may be a bit biased”, but how awesome was that! Great energy and loads of ❤️ in the room Go team ??! Make sure to ?? vote! #Eurovision

READ ALSO: Five facts about John Lundvik, Sweden's British-born Eurovision star
Lundvik was born in London, but was adopted when he was one week old by a Swedish couple who were living in England. His family returned to Sweden when he was six, and he grew up in Växjö.
Lundvik's three backing singers The Mamas may look straight out of a Memphis gospel choir, but Loulou Lamotte is from Malmö, and Dinah Yonas Manna is from Stockholm.
Only the third and fourth, Paris Renita and Ashley Haynes, are from the US, and Renita has long had a career in Sweden.
Lundvik is also one of the four songwriters behind the UK's entry Bigger than Us.
Vocabulary
A song — en låt
A happiness —en lycka
A music compeition — en musiktävling
A prize — en vinst
We're aiming to help our readers improve their Swedish by translating vocabulary from some of our news stories. Did you find this article useful? Do you have any suggestions? Let us know.