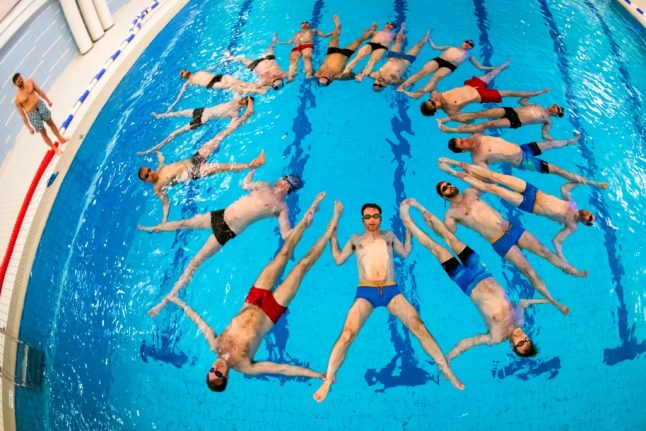 On a recent May evening, these 18 amateur swimmers ran through their formations and underwater acrobatics under the watchful eye of their coach Claudia Arasa (pictured below).

They're tweaking their choreography before heading off to Ibiza, where they will compete in the Men's Cup on May 24-26.

The team members have diverse backgrounds, comprising a doctor, a tramway driver, a movie director and a teacher, among others.

But what unites Anders, Mika, Elric and the others is their age: members must be over 40; and physique: they must not be too well-trained, in fact some are smokers and most have a hint of a belly and are greying or balding. And perhaps most importantly, they must have a good sense of diplomacy.

The latter is necessary for this motley crew to come together in the name of collective artistry.

“It's like a rock band, we're a group, with all the friction and all the energy that comes with being very close together,” Sam Victorin, a member who co-founded Stockholm Simkonst Herr (Stockholm Art Swim Gents) in 2003, tells AFP.

The team doesn't compete in major international competitions — their philosophy is to “have fun, but we try to do it with a serious approach.”

“Some people thought when we started that we were trying to ridicule the sport. But it was the opposite.” Elric Sauze, a Frenchman who has lived in Sweden for seven years, joined the team because of his love of dance and swimming.

This design gallery curator from Brittany is not bothered by the stereotypes associated with this traditionally feminine yet demanding discipline, known for its sparkly ballerina outfits.

“There is no sport for gay people, nor for straight people,” he says.

“From the sport point of view they're very strong, but since they're grown-ups they lack a bit of flexibility,” she says.

They are however very good at “holding their breath for a long time” — essential for the sport's underwater formations.

“The main challenge I have with them is that they love to talk so I really have to make them pay attention to me,” laughs Arasa, who when she's not coaching is a doctoral student in immunology.

The team has been the subject of several documentaries and inspired hit movies, including the French comedy “Sink or Swim” and Britain's “Swimming With Men”.

The swimmers hope that synchronised swimming — officially re-named artistic swimming in 2017 — will one day be open to men at the Olympic Games, as it is at the European and World Championships.