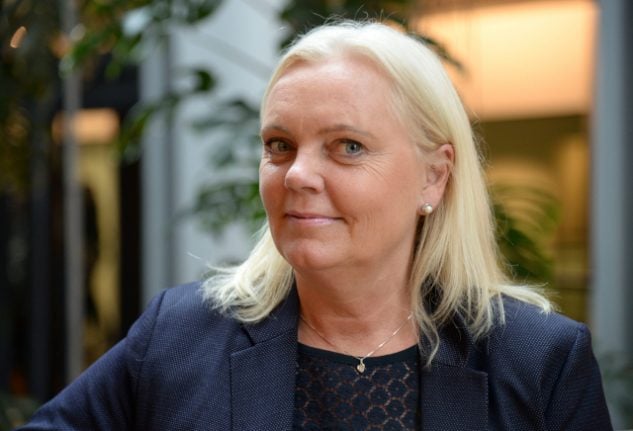 Kristina Winberg was removed from the Sweden Democrats' EU election ballot after accusing a fellow politician of groping another member of the party. Photo: Anna Karolina Eriksson/TT

Kristina Winberg, who cites Hungarian Prime Minister Viktor Orbán as her political role model and was running for the European Parliament on a platform of fighting illegal immigration, Islamism and terrorism, was the party's fourth top name for the election until Sunday, when she was abruptly removed.

In a statement, the party said she was guilty of “reprehensible and reckless conduct, both in relation to colleagues and staff – but also in relation to directives and wishes put forward by the national organization” and that she had “conspired to smear party colleagues with the help of the media”.

According to Swedish tabloid Expressen, the ousting came a day after its reporter confronted the Sweden Democrats' top candidate Peter Lundgren with allegations he had touched a female colleague's breasts.

The woman in question and Winberg discussed the alleged incident, which is said to have taken place at a party event last year, in two taped phone conversations just a few days later, Expressen reports.

In the conversation the woman describes how she “panicked” and Winberg says that she witnessed the incident. Late on Sunday she confirmed to Expressen that she had recorded these phone conversations, but said that her mobile phone had been stolen and that she had not spoken about it to media before.

“I saw that he brought his hands under her sweater and pulled on her bra and she resisted,” she said. Speaking to Expressen on Saturday, before Winberg's name was removed from the list, Lundgren first denied the allegations, but then said: “I probably touched her breasts when we were sitting there, we were pretty drunk that night, and she pushed my hands away. I know that I put my hand on her breast but not with the intention that anything would happen. Not at all.”

“I'm not saying that she's lying. It's just that we probably have completely different versions of this,” he added, later telling Swedish public radio that the story had been “very exaggerated”.

Sweden Democrat spokesperson Christian Krappedal wrote in an email to Expressen that the claim that Winberg had been crossed off the list over the allegations was untrue, but did not elaborate.

The woman herself, who has not been identified in Swedish media, said in a statement emailed to Expressen by the party that she wanted to put the incident behind her.

“Peter and I know each other from before,” she said. “We have spent time together privately and still do. On this occasion Peter misinterpreted the situation and went too far. I told him off and he stopped. We have discussed the incident, he has apologized and we have moved on. We still have a good relationship and have, among other things, travelled together with our partners and seen each other on other occasions. To me, this has already been resolved.”

Swedes will go to the polls to vote in the European Parliament election on May 26th.

READ ALSO: Who are the Swedish EU candidates and what do they want?