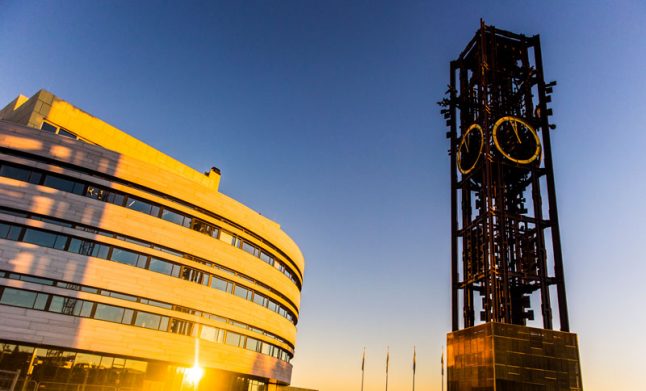 The sun reflects off Kiruna town hall. File photo: Hanna Franzén/TT
At around 1am on Monday, the sun peaked over the horizon above Kiruna and there it will stay for nearly two months. The sun won’t set again until the wee hours of July 17th.

Yesterday, a couple of minutes after midnight, the sun rose over Kiruna in the very north of Sweden. It has since remained above Kiruna's horizon and will do so until mid-July… pic.twitter.com/mhde7Tips7

Located nearly 150 kilometres north of the Arctic circle, Kiruna Municipality is the most populous area in Lapland. Its borders extend to Norway and Sweden and its administrative centre is in Kiruna, a mining town with a population of around 20,000 that is in the midst of a multi-year move.
READ ALSO: Tales of the Midnight Sun – on the night train from Kiruna to Stockholm

READ ALSO: When you move an entire city, what happens to its dead?
Because the mining company LKAB’s drilling has worked its way under the town’s structures, it was decided in 2014 that a large portion of the town would be demolished and rebuilt three kilometres to the east. The project is supposed to take 20 years and will soon focus on carefully relocating the remains of some 3,000 deceased residents.

If the gradual shifting of an entire town isn’t enough to tame your envy of Kiruna’s midnight sun, it pays to remember that what goes up does indeed eventually go down. So while Kiruna residents might enjoy the midnight sun over the next couple months, come wintertime they won’t see the sun at all between early December and early January.