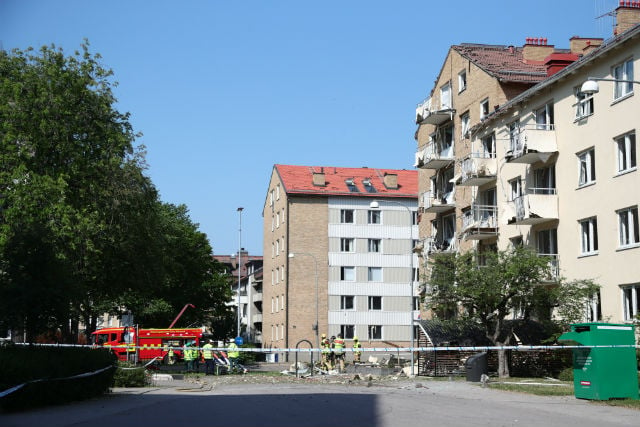 The blast blew out all the block's windows. Photo: Jeppe Gustafsson/TT
Police suspect the powerful explosion that blew out several apartment windows in the centre of the city at about 9am was caused by “an explosive device deliberately placed outside” in the area of Hamngatan/Ågatan, police investigator Magnus Skoglund told a press conference in Linköping on Friday afternoon.
However, it is not yet clear exactly what exploded or who put it there. Skoglund said they did not know for sure who was responsible, but that police had a “working hypothesis” they were currently investigating.
Citing unnamed police sources, local newspaper Borås Tidning reported earlier on Friday that people linked to notorious motorcycle gang Bandidos were behind the explosion, but Skoglund would not confirm.
“We are investigating many theories,” he said, later adding to public broadcaster SVT that police suspect links to the criminal underworld but that it was too soon to speculate on which groups may have been behind it.
Police do not believe the explosion was linked to terror crimes, but said they were not ruling anything out.
Earlier in the day, local rescue services at 10.20am described the event as a “gas explosion”, but later said this had been a mistake. “We don't know anything about what caused the explosion, that is for the police to investigate,” said the rescue services in an updated statement.

While the material damage to nearby buildings was significant, nobody was seriously injured in the explosion. Around 20 people received minor injuries and on Friday afternoon two of them remained in hospital.
Simon Harris, a reader of The Local, said that he had heard the explosion.
“We heard the explosion clearly this morning while swimming in the Stångån, Hjulsbro, which I’ve clocked on Apple Maps as 8.3 kilometres from Hamngatan,” he wrote in an email.
The blast destroyed the windows and blew off the metal balconies on the apartment block. Photo:  Jeppe Gustafsson/TT
Pontus Johansson, who lives in the block opposite, told the Aftonbladet newspaper that he had only just got up when the blast happened.
“I was in the shower when I noticed that the entire house was shaking, it was like thunder,” he said. “There was a lot of chaos, and a huge number of police outside here.” Several fire engines were sent to the building. Photo: Jeppe Gustafsson/TT
Helene Trygg, who lives on other side of the affected building, told Expressen that she had been woken by the explosion.
“At first I thought it was thunder,” she said. “All my flower pots smashed on the floor.”
She said she had been told the register herself as uninjured.
Owe Gewecke, who lives nearby, said that “the whole building shook” when the blast went off.
“I was lifted half a metre off the ground,” he told the newspaper. “The balcony nearest to it is completely destroyed.” The blast blew out the windows of a nearby shop. Photo: Jeppe Gustafsson/TT