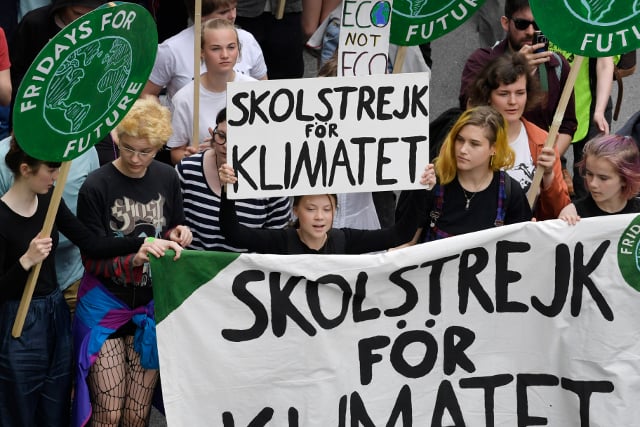 Greta Thunberg holding her 'school strike for the climate' sign at a protest in Stockholm. Janerik Henriksson/TT

The 16-year-old issued a statement declaring it “a huge honour to receive Amnesty International's Ambassador of Conscience Award”, saying it was recognition for everybody inspired by her Fridays for Future movement that has seen students strike from school to take part in climate protests.

“To act on your conscience means that you fight for what you think is right,” she said.

“We have a duty to try and improve the world. The blatant injustice we all need to fight against is that people in the global south are the ones who are and will be most affected by climate change while they are the least responsible for causing it.”

Thunberg, a fierce campaigner with a gift for public speaking, has become a figurehead for young climate activists internationally. International organizations often invite her to climate change events in an effort to put a human face on the fight to curb carbon emissions.

Last week, she appeared alongside actor and former politician Arnold Schwarzenegger at a conference in Austria discussing ways to tackle climate change. The head of Amnesty International, Kumi Naidoo, lauded Thunberg's work in a statement announcing the prize from his organization.

“Every young person taking part in Fridays for Future embodies what it means to act on your conscience. They remind us that we are more powerful than we know and that we all have a role to play in protecting human rights against climate catastrophe,” he said.

Last month, Thunberg announced she was taking a year off school to pursue her campaigning.

In September she is to participate in a global summit of climate change organized by UN secretary-general Antonio Guterres. That poses a bit of a quandry for Thunberg, who eschews air travel because of the carbon footprint it leaves.

“Because I don't take planes, I'm going to have to cross the Atlantic in a different way. I haven't yet found the solution, but in any event I will be going,” she told the Swedish daily Dagens Nyheter.