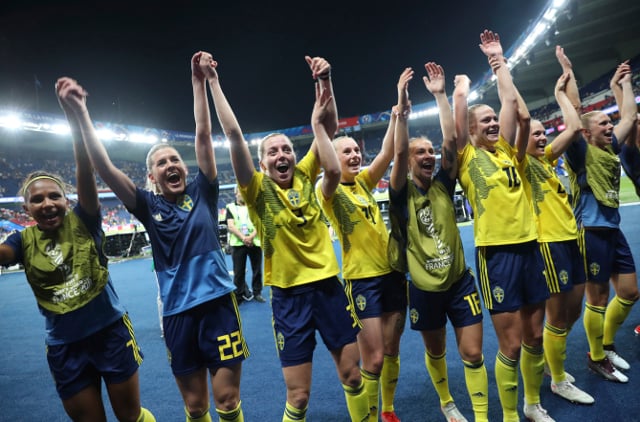 Sweden was one of the first countries to have a women's national football team. They started out in the 1960s at a time where having a female team was completely out of the ordinary. And the team started out strong with their first win being the first official Women's European Cup in 1984. They tied the game with England and had to move on to penalty shots where Sweden eventually won 4-3.

Unfortunately, that was also Sweden's last major win in women's football. Since the 1980s they have managed to move forward in each major women's championship, but always fallen short in either the finals or semi-finals.

The two times where the team came close to another major win were the 2003 World Cup and 2016 Olympics. In the 2003 Women's World Cup they were actually considered to be the favourites, but lost against Germany in the final. They lost to Germany in the Olympics as well, solidifying themselves as the eternal runners-up… or maybe not? Sweden and Germany facing off at the Olympics 2016. Photo: Lea Correa/AP/TT

Ninth in the world

As disappointing as it is to never place first, coming in second or third isn't that bad.

Out of the 23 tournaments the Swedish women's team have entered, they've managed to finish on the podium a solid nine times. This says a lot about what the team is capable of. They are considered to be the ninth best women's team in the world, meaning they have the potential to take home the cup if they really wanted to.

One commonly repeated criticism of the team is that they lose confidence towards the end, which weakens their defence. The team has to learn how to channel their raw Viking energy and crush their adversaries for a well-deserved win. The Swedish team celebrate after a goal. Photo: Eraldo Peres/AP/TT

Peter Gerhardsson is the current coach for the Swedish women's national team.

He replaced the incredible Pia Sundhage after Sweden failed to move forward in the quarter-final stage in the European Cup 2017.

Gerhardsson originally started out as a player but retired in the 1990s before turning to coaching. He's had tremendous luck with his league team, BK Häcken in Gothenburg (men's side), who recently won the Swedish cup. With the women's team, he's had more trouble establishing himself, with the World Cup giving him a good chance to show what the team can do. Path to the World Cup

The Swedish women's national team initially technically qualified for the Women's World Cup due to the Danish team cancelling their own appearance. The Danish drop-out was due to unresolved compensation issues. Denmark was deep in pay negotiations with Fifa but could not agree on terms, prompting the team to protest.

First, they refused to play a friendly game against the Netherlands in September and then later they cancelled a game against Sweden causing the Swedish team to top the rankings with an automatic 3-0 win. Fifa considered expelling the Danish team from the Women's World Cup altogether but later allowed them to try again.

Sweden later asked for a rematch against the Danish team because they didn't want to win on the grounds of cancellation but instead prove themselves – which they did, beating their Nordic neighbours and securing their place in the competition. So, what are their chances?

The Women's World Cup, held in France this year, saw Sweden in Group F with Chile, Thailand and the United States.

The Swedes won both their matches against Chile and Thailand but came second in the group after losing 0-2 to the United States. Considering that the United States, is considered to be the number-one women's team in the world, are the reigning champions and that Sweden rested a host of usual starters, that's not a bad score.

Sweden next fought their way through to the quarter-finals after beating Canada 1-0, thanks to a goal by Stina Blackstenius and an impressive penalty save by goalkeeper Hedvig Lindahl. They then came from behind to beat favourites Germany with goals from Blackstenius and Sofia Jakobsson earning the team a spot in the semi-finals.

The key to Sweden is their defence. As The Local wrote at the start of the tournament, if they can strategize well enough they might have a chance at winning or at least ending up in the quarter-finals or semi-finals.

The Swedish women's national team have a lot of potential and have already surprised many doubters. All they need to do now is work out their weak spots so that they can come out on top. The Swedish women's national team pose for a photo before a match. Photo: Leo Correa/AP/TT