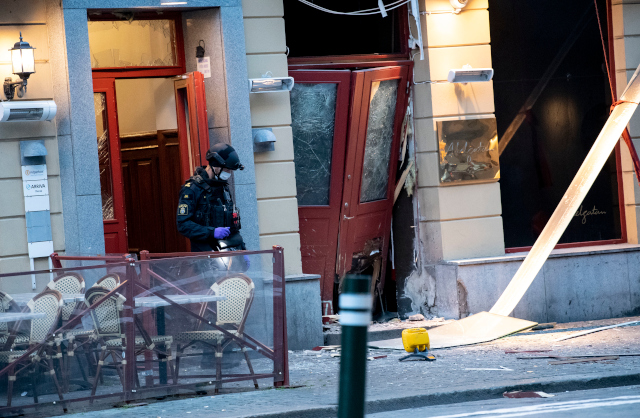 Police at the scene of a blast outside a nightclub in central Malmö. Photo: Johan Nilsson/TT

Police were called out to a building in the Rosengård district just after 2am. An hour later there was a second explosion outside a nightclub, which was closed at the time, at Adelgatan in central Malmö.

No one was injured in either incident, but there was significant material damage to the buildings.

Police could not immediately say what was behind the incidents, but by 6.30am the police bomb squad had finished their investigation of the scene in Rosengård and the cordons could be lifted.

Police at the scene of the Rosengård explosion on Tuesday. Photo: Johan Nilsson/TT

Police would not say if the blasts were linked to Monday's fatal shooting of a young man in the Nya Bellevue residential area of the city. A second non-fatal shooting took place nearby later in the day.

It is not clear if the two shootings were linked, but police said nothing indicated that they were.

The shootings are in any case not believed to be connected with an incident at Malmö central train station on Monday morning, where a police officer shot a man after he claimed to be carrying a bomb.

Forensic teams were still examining the contents of the man's bags late on Monday, but it is not thought they actually did contain any explosives. Click here to read more about the train station incident.