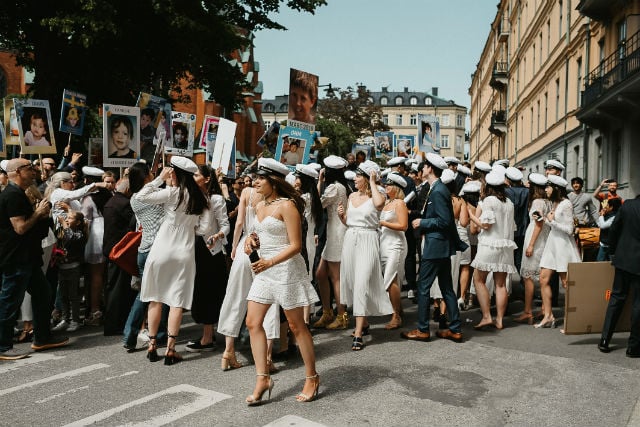 If you’ve ever spent the first week of June in Sweden you’ve probably witnessed the carnage that is high school graduation. Hoards of screaming teenagers donning white captain hats celebrate aboard trucks that traverse the city, blasting out music as students party enthusiastically. It’s admittedly out of character for the normally mild-mannered Swedes (a trait that perhaps kicks in later in life).

Stockholm International School has a global outlook and an international student body but it fully embraces this uniquely Swedish tradition.

For Sumedha Jassal, the blowout graduation ceremony gives her the drive she needs to get through the gruelling exam period. The 17-year-old, who is originally from India, studied in Sweden between grades 3 and 7 before returning to her homeland for family reasons. Several years later, her family moved back to Sweden where she has completed her high school education.

While Sumedha is excited to get her exams out of the way so that she can let her hair down, it’s not the only motivation she has to succeed. She aspires to become a genetic analyst and has applied to study at universities in England as well as Sweden’s prestigious Karolinska Institutet.

Reading Siddhartha Mukherjee’s book The Gene inspired Sumedha to pursue this career path but it was Stockholm International School that nurtured the ambition.

“I chose to read the book myself but I used it for my extended essay, which is a requirement of the IB, in genetic disposition for breast cancer. I also used research that I took from Karolinska Institutet,” she recalls.

Stockholm International School follows the International Baccalaureate (IB), a rigorous program that teaches students to think critically and independently. Final-year students can choose their own topic for a compulsory 4,000 word essay, in Sumedha’s case it allowed her to show one of her top choice universities that she was already engaging with their research at a sophisticated level.

“It shows that I’m already kind of working with them which is pretty cool,” says the teenager.

Sumedha isn’t the only student with scientific aspirations. Olivia Weiner, who has Swedish parents but lived in London until she was 12 years old, has already accepted a place at Stanford University in California where she plans to study physics and maths.

She believes the small class sizes at Stockholm International School meant she got the attention she needed to excel in these notoriously difficult subjects.

“Generally in the high level maths and physics classes you don’t have very many students so you can interact well with your teacher which is especially important in those subjects. Your teacher has a lot of time to spend on you and can personalise your education.”

Olivia praises the education she has received at SIS but believes that the soft skills and cultural awareness she has learned in the international environment are equally as important.

“It’s definitely helpful to be surrounded by students who have gone through similar things as you have in terms of moving countries and being between different cultures. It helps you learn how to approach different people.”

It’s something that her classmate 18-year-old Emily Asrasiabi agrees has been a valuable part of her SIS journey too.

“The world is globalising and that’s a fact. You need to be appreciative of other people and their cultures. It’s a crucial personality trait that people should have.”

Another budding scientist, following graduation Emily plans to study medicine in the UK. One day, she hopes to specialise in psychiatry, an interest she has developed whilst studying the subject at SIS. She agrees with Olivia that the personalised approach to education has put her on the promising path she is now on.

“Many of my classes are really small and I think that helps build the student-teacher relationship. You can always approach the teacher and set up meetings with them. They help you to identify where your weaknesses are and work on them. I feel that they really care about us, as people not just as students.”

All three girls are excited for the hard-earned fun of the graduation ceremony. Of course, the end of any era is always bittersweet especially when such deep bonds have been forged over the years.

“Everyone at Stockholm International School is sailing in the same boat,” says Sumedha. “The fact that everyone is going through the same thing makes you become closer. You seem almost like a family.”

This article was produced by The Local Creative Studio and sponsored by Stockholm International School.