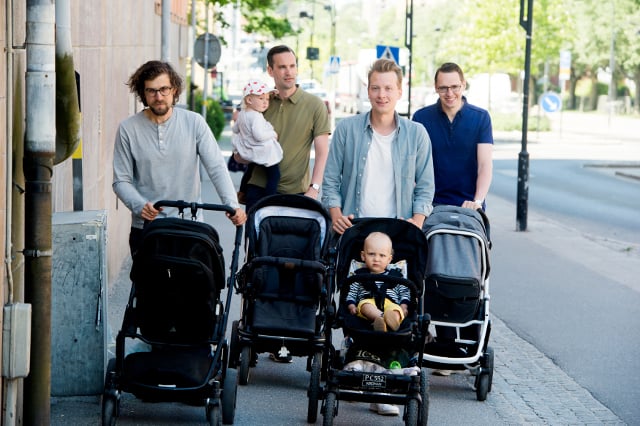 New immigration laws, , a ban on smoking on terraces and changes to parental leave are some of the changes. Photo: Christine Olsson/TT

This article is available to Members of The Local. Read more about Membership here.

But after a trial period, Sweden's centre-left government earlier in June voted for an amendment which will allow customers across the entire country to have alcohol from Systembolaget delivered to their doorstep. Parental leave can be taken by more people

The change is intended to make it easier for step-parents and same-sex couples who undergo artificial insemination abroad to take advantage of parental leave benefits. Swedish government ministers will get a raise

In general, wages in Sweden have grown by around 2.5 percent a year since 2013, according to Sweden's National Mediation Office, and the executive power is also in line for a pay rise.

From June 1st, Prime Minister Stefan Löfven will get paid 4,000 kronor (approximately $420), which brings him to a monthly salary of 176,000 kronor. Other cabinet ministers will get paid 139,000 kronor a month – a 3,000 kronor increase. Parliament's Ministerial Remunerations Board sets the government's salaries.

A ban on smoking at outdoor restaurants, train platforms, playgrounds, bus stops and other public spaces will come into force on July 1st. The ban also applies to electronic cigarettes. No smoking in public areas any more. Photo: Pontus Lundahl/TT

If you've paid for services like repairs, cleaning or maintenance on your owned home then there are ROT & RUT tax deductions you can take advantage of.

For cleaning work (RUT), 50 percent of the labour costs can currently be deducted at a cap of 25,000 kronor for people aged under 65 and 50,000 for over-65s. But the cap is now being raised to 50,000 kronor for everyone from July 1st, as part of the government's deal with the Centre and Liberal parties.

Only “simple cleaning costs” are deductible (cleaning that doesn't require a specialist or heavy machinery), while professional cleaning of a home before moving can also be deducted. If you pay someone to clean your house, you can deduct some of it off your taxes. Photo: Fredrik Sandberg/TT

Reduced VAT on digital books (but not cheaper books)

In 2002 Sweden cut VAT on print books from 25 percent to six percent. From July 1st the lower VAT rate will be rolled out to e-books and audio books as well. However, this time around it is not expected to lead to cheaper books. Publishers are instead predicted to use the extra money to improve the technical side of things and invest in spreading the word about digital books to reach new audiences. VAT on e-books will be cut this summer. Photo: Christine Olsson/TT

No need for planning permission for certain kinds of patios

It is a truth acknowledged in Sweden that any homeowner with a garden will, come the summer holidays, feel the urge to build a patio (altan). From July 1st, the legal process will become slightly smoother, thanks to January's four-party government deal. Property owners will no longer need planning permission as long as the patios are not higher than 1.8 metres and are built within 3.6 metres from the house.

However, the patio must not be built closer than 4.5 metres from the neighbours' land without their consent. But what good is a patio when the summer's like this? Photo: Hasse Holmberg/TT

Warning label for some loans

Companies offering high-cost credits, loans which today have an interest rate of at least 29.5 percent, will have to label them with warning triangle from July 1st. The warning is to inform consumers that if they fail to pay off their debts they risk being given a record of non-payment, which could harm their credit record.

The label will also inform consumers of where to turn for financial advice. The warning label will look like the triangle in the picture. Photo: Leif R Jansson/TT

Alcoholic popsicles will be regulated by the same laws as other kinds of alcohol from July 1st. This means that boozy ice lollies with an alcohol content higher than 3.5 percent ABV (alcohol by volume) can only be sold by Sweden's state-run alcohol chain Systembolaget and may no longer be sold in grocery stores. The tough restrictions on family reunification introduced after the refugee crisis of 2015 will be slightly lifted, making it easier for people who do not have refugee status, but are entitled to a certain kind of protection, to bring their immediate family members to Sweden. The change will come into force on July 20th. But Sweden's temporary residency permit laws will be extended until 2021. Photo: Marcus Ericsson/TT

Changes to taxes and collective agreements at work

Most collective agreements (kollektivavtal) between employees and employers in Sweden include a so-called 'peace obligation' (fredsplikt), which is an agreement not to initiate combative measures such as strikes, lockouts, or blocking overtime. As of July 1st, this will be expanded with new conditions required in order to announce a strike or other such measures.

Elsewhere in the workplace, employer's payroll taxes for young people will be reduced in an effort to get more young people into work, and sole traders' reduced employer fees for their first employee have been extended from one year to two. Students in preschool or primary school who are struggling with their reading, writing or maths results will receive extra support under a new 'read-write-count guarantee'.

This means that if a teacher thinks a child isn't going to reach the required level for their age group, a special assessment will be done by trained teachers to work out the child's support needs. That guarantee comes into effect from July 1st.

LONG READ: What's behind the rising inequality in Sweden's schools, and can it be fixed? Smear tests free to all women

Women will have the opportunity to have a smear test (the routine test to look for changes to cervical cells) without needing to pay a fee to the regional council. Currently this varies from region to region, with fees of around 100 kronor in some areas which are believed to put women off undergoing the check.

SPONSORED: Why moving to Sweden is the perfect time to give your health a check Only people aged 15 or older will be allowed to use a jet ski (vattenskoter in Swedish), as it is considered to be a powerful vehicle which young people can have difficulties assessing the risks of using.