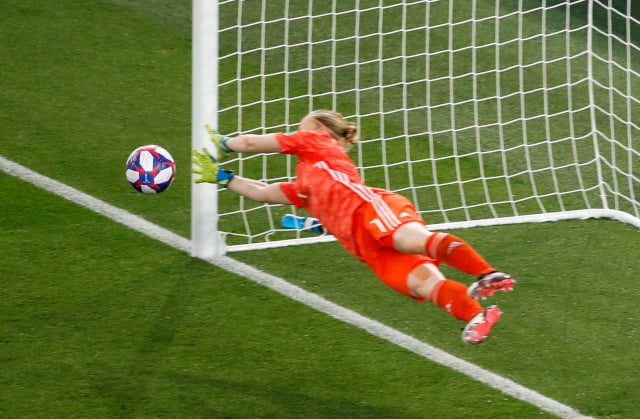 Stina Blackstenius scored the only goal of a cagey match as Sweden beat Canada 1-0 in Paris on Monday to reach the women's World Cup quarter-finals.

The victory sets up a rematch of the 2016 Olympic final as the Swedes play Germany on Saturday in Rennes. Three years ago Germany won the gold with a 2-1 victory in Rio de Janeiro, though Blackstenius scored in that match.

On Monday, Blackstenius struck the only goal in the 55th minute with a brave finish after a crisp Swedish counter-attack.

After that, the last-16 tie was once again a story of VAR. A review gave Canada a penalty, but Hedvig Lindahl, at full stretch, saved Janine Beckie's driven spot-kick.

That save, along with a dominant display against high crosses, earned Lindahl the player of the match award after a game in which Canada had only two shots on target.

Lindahl has been relegated to the bench at Chelsea, but dealt tersely with a question on whether she had answered any doubters.

“If they doubted I can make any penalty saves that proved them wrong, yes,” she told a press conference.

“I've almost done that several times in my career. I've been close. This time I had to stretch fully. Then ‘Yes!' Just pure joy. We got a lot more energy from that.” Then, referee Kate Jacewicz pointed to the spot after a foul by Ashley Lawrence, but the decision was overruled after VAR detected a Swedish offside in the build-up.

Both sides came into the knockout rounds after losing dead rubbers to finish second in their groups. Canada, ranked fifth in the world, went down 2-1 to the Netherlands. Sweden, ranked ninth, fell 2-0 to reigning champions the United States, but rested a host of unusual starters.

Neither side managed a shot on target in the first half with the temperature tickling 30C.

Christine Sinclair, chasing the all-time women's international scoring record, had one shot, early in the second half, a 25-metre free-kick that curled gently wide.

Sweden took the lead on the counter.

Kosovare Asllani ran onto a long pass down the left, paused and then curled the ball behind centre-back Shelina Zadorsky and into the path of Blackstenius. The centre-forward hit the ball first-time from just inside the box and before being clattered by Zadorsky and goalkeeper Stephanie Labbe. The shot looped off Labbe and into the net.

Canada responded with a burst of frenzied pressure and were rewarded on 68 minutes when Desiree Scott met a weak clearance from a corner with a volley that struck Asllani on the arm.

Sinclair, coach Kenneth Heiner-Möller said, ceded the kick to Manchester City's Beckie who drilled her penalty low to Lindahl's right, but the Chelsea goalkeeper hurled herself across the goal to save.

It was the 22nd penalty awarded at this World Cup, equalling the record set in Canada four years ago, with 10 matches still to play. That also equals the pre-VAR record for men's World Cups, although at last summer's 32-team tournament in Russia, the number rocketed to 29.

Then VAR denied the Swedes a penalty.

Sweden will play Germany, a team they have not beaten in 11 tournament matches, going back to 1995.

“What happened years ago is history,” said coach Peter Gerhardsson. “We need to look at how Germany played their last three matches.”

Gerhardsson said he had used music as preparation.

“I had the best preparation for a match like that. I listened to four albums by Neil Young, Canada's top performer,” he said, adding that the menu would be a little different for Germany.

“I'll listen to [metal band] Rammstein, they released a new album recently. It will be heavy going on Saturday.”